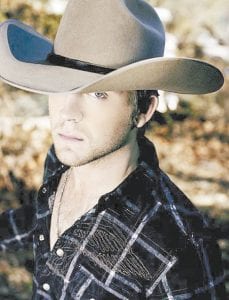 Chart-topping country musician Justin Moore will perform in Jenkins on Saturday night at 7:30.

Rising country music star Justin Moore will perform in concert Saturday (May 8) at the Jenkins High School gymnasium. Proceeds from the show will benefit student programs at the school.

Moore, a 26-year-old native of Poyen, Arkansas, has had two Top 10 country music hits, including the chart-topping “Small Town USA,” since releasing his self-titled debut album last August. Moore’s single, “Backwoods,” reached No. 8 on the chart.

Moore is also establishing himself as a quality songwriter, having co-written nine of the 10 tracks on Justin Moore, which debuted at No. 3 on the county album chart.

Moore is married. His wife, Kate, gave birth to the couple’s first child on February 11.

Moore’s performance in Jenkins is in keeping with the theme behind his “Small Town USA” tour, which includes stops in several small towns. After spending much of the rest of May and June opening for larger acts in towns like Indianapolis, St. Louis, Cincinnati and Nashville, will return to the small-town fair circuit before returning to Kentucky on July 25 for the Hullabalou Music Festival at Churchill Downs in Louisville.

Tickets for Moore’s Jenkins performance, which begins at 7:30 p.m., are $20 advance and $25 at the door. Folk Soul Revival of Wise County, Va., will open for Moore.