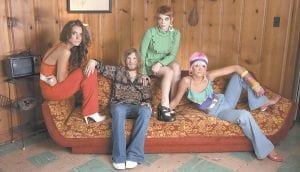 When country music superstar Keith Urban first heard the Jypsi single “Mister Officer” he said he went out and “bought it immediately (and) played it relentlessly to everyone and anyone who’d listen. It’s just so insanely fresh and fearlessly original. I love this band.”

Music lovers from Letcher County and surrounding areas will have the chance to see just what Urban is talking about when Jypsi, a Nashville-based band made up of four very talented siblings who range in age from 19 to 29, take the stage at Summit City in Whitesburg on Saturday (Dec. 4).

Though they are Nashvillebased and country at their core, the members of Jypsi are versatile enough to draw on a broad spectrum of musical influences, from Bill Monroe to Django Reinhardt, and to be invited to the stone country Stagecoach Festival in the California desert and to the more broadly based Bonnaroo in rural Tennessee and South by Southwest in Austin.

The three Rische sisters and their brother who form Jypsi have a literal lifetime of playing behind them. Jypsi quickly established themselves as the freshest splash of color ever to hit Honky-Tonk Row in Nashville’s Lower Broad district. Originally from upstate Illinois, their family band had toured extensively, with stops in Branson, Missouri and Myrtle Beach, S.C., along the way. Once they hit Nashville, they used their six-day-a-week, four-hour-a-day stint at Layla’s Bluegrass Inn to refine their sound and build a local following until they won a record deal that has allowed them to take their innovative sound to the rest of the country.

The oldest of the four siblings, Amber-Dawn Rische, told the Memphis Commercial-Appeal
recently that the band chose the name Jypsi in 2007 after signing a record deal with Arista Nashville.

“The name we had before was Silk ‘N’ Saddle,” says Amber- Dawn, at 29, the oldest of the four. “We tried it for a few years, but it was really lame and we didn’t really like it. So when we got signed, we were already wanting to change our name, and our label didn’t like it either. We brainstormed and came up with Jypsi (pronounced like gypsy). It was perfect because it made sense. It has a meaning for us. Growing up on the road traveling so much, we were kind of gypsies.”

As Commercial-Appeal
reporter Mark Jordan pointed out in a recent story, the Risches did have a “gypsy-like upbringing,” forming their first band in Branson when 18-year-old lead singer Lillie Mae Rische was just three years old. As the group improved, they eventually moved to Myrtle Beach, where they performed at Dolly Parton’s Dixie Stampede. Producer “Cowboy” Jack Clement, known for his work with Jerry Lee Lewis and Johnny Cash early in their careers, urged the Riches to move to Nashille and work with him.

“We started out like a little bluegrass gospel band,” Amber-Dawn told the Commercial-Appeal.
“But as we evolved, we spread out. We have so many influences now, it kind of all meshes together when we play and we all just bring our own style. It went from a bluegrass gospel thing to what we do now, which I don’t know exactly what you would call it. It has all the elements of country bluegrass, a little bit of rock, a little funk. It’s all mixed into one eclectic style.”

Reporter Jordan points out that while Jypsi’s “anything-goes mix” helped the band earn rave reviews for their 2008 self-titled debut, the “country music establishment didn’t know what to make of the group, with “their ‘60s hippie chic fashion sense” complicating things even more.

“It’s been a big struggle for us,” Amber-Dawn told the Commercial

Appeal.
“We’ve had constant opposition with our clothing and our sound. It’s something people are always commenting on. People, as far as the general public, love it, but then we had a lot of problems with country music radio. They don’t like that we have something this or look too that or sound too pop.”

Jypsi’s first album was produced by former Dixie Chicks producer Blake Chancey. As was the case with the Dixie Chicks, Jypsi’s sound is rooted in traditional bluegrass. The band combines pop-friendly hooks with the siblings beautiful harmonies and instrumental firepower for a sound uniquely their own.

In addition to their singles “Mister Officer” and “I Don’t Love You Like That,” the band’s concert list is known to feature powerful and moving covers of songs such at Simon & Garfunkel’s “Bridge Over Trouble Water” and the traditional “House of the Rising Sun,” which appears on their debut album. Another concert highlight is their bluegrass instrumental “Kandi Kitchen.”

Opening Saturday’s all-ages show at Summit City will be Chantal Toler of Letcher County and Cora Lee and the Townies of Lexington. Music begins at 8 p.m. sharp. Admission is $10.