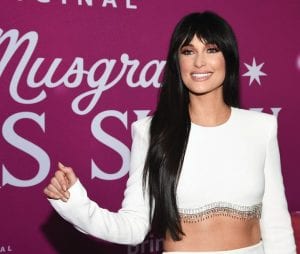 Grammy winner Kacey Musgraves knows who the real star is in her family — her grandmother. That’s why the singer put the woman she calls Nana in her upcoming holiday special, “The Kacey Musgraves Christmas Show.”

“Basically, this is just Nana’s world. We’re just all livin’ in it. This is Nana’s Christmas special if you hear from her. I’m just in it,” said Musgraves at a special screening of the special in New York.

Musgraves initially worried how her grandmother would handle being on camera, but those fears quickly subsided.

“I was like, ‘OK, this is my 80-something-year old grandmother. Is she gonna come in like, forget the lines, like, you know. She’s not used to this,’” Musgraves said. “She came in, she gave us adlibs, she was like giving us different inflections like she knew what to do. It was really cute.”

Musgraves got the idea for the special a year ago and spent months coming up with the concept. Filming took place during the summer in a hot California.

“It was like, 90 degrees in LA in like this airplane hangar that we shot it in, didn’t have air conditioning. So, I was wearing Christmas clothing, on my feet for like 16 hours a day, like just tryin’ to make Christmas happen. And I think we did,” Musgraves said. “It’s been Christmas for an entire year for me. So, I can’t tell if I’m sick of it or if I’m really excited. I think I’m really excited.”

Earlier this month, Musgraves took home female vocalist of the year and video of the year for “Rainbow’’ at the Country Music Association Awards. The show was hosted by Carrie Underwood, Dolly Parton and Reba McEntire and was hyped as a night dedicated to the women of country music.

Musgraves said she appreciates the effort, but she doesn’t “think it should just be limited to just one night.”

During the show, Musgraves performed “Rainbow Connection’’ with Willie Nelson, weaving in some of her song “Rainbow.’’ Performing with one of her favorite male country singers was a dream come true, she said.

“I was proud to stand up there with a male icon that I’ve looked up to my entire life as a woman, as a songwriter standing next to a male counterpart that I now have a friendship with that we respect each other.”