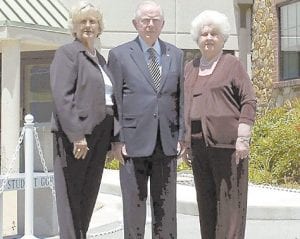 CAUDILL HALL – The administration/classroom building on the Whitesburg campus of Southeast Kentucky Community and Technical College has been named Caudill Hall in honor of the late Judge James M. and Atha B. Caudill. The Board of Regents of the Kentucky Community and Technical College System approved the naming of the facility during its quarterly meeting. From left to right are the children of Mr. and Mrs. Caudill, Anna Craft, James M. Caudill Jr. and Pauline Ritter Combs.

The naming of the building was approved recently during the quarterly meeting of the Board of Regents of the Kentucky Community and Technical College System.

The official request for the naming of the building had been forwarded to the KCTCS board in May in the form of a resolution submitted by Southeast’s Board of Directors.

Under the leadership of Mrs. Combs, the Whitesburg Education Development Foundation Inc. was formed in 1990. To date, the foundation has contributed $1.6 million in cash and property in support of Southeast Kentucky Community and Technical College.

Mrs. Combs, according to SKCTC President Dr. W. Bruce Ayers, has served as chair of the college’s Partners in Progress Campaign and as honorary chair of the current Fulfilling the Promise Campaign. Her philanthropic efforts have resulted in more than $6.8 million being raised for the college, and her efforts were instrumental in the development of the Whitesburg campus.

“Pauline Ritter Combs has been involved with the project since its inception, and I can state unequivocally that without her help and the Caudill family, the college and KCTCS would not have been the recipient of the Whitesburg classroom/administration building nor would Southeast have been able to establish a campus in Whitesburg,” said Ayers.

“She worked tirelessly to convince Whitesburg city officials of the benefits of having a college presence in their community. She also raised funds to renovate the Whitesburg Coca-Cola plant which the city donated to KCTCS in 2002 at a value of $1.9 million. It is entirely fitting that the building be named Caudill Hall as a testament to the contributions of this family to Southeast Kentucky Community and Technical College.”

The Whitesburg campus opened its doors to students in 1992 and currently serves over 500 students. Today, the full-service campus, one of five in the SKCTC network, operates out of three buildings.