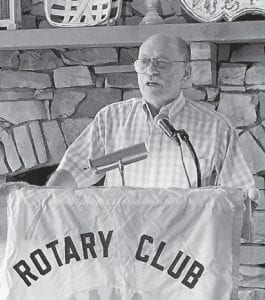 Author, artist, storyteller, frequent contributor to local newspapers and magazines, and member of Kiwanis Club of Jenkins Ked Sanders delivered the program at the May 14 Rotary Club meeting.

Many associate Sanders with authoring the wellreceived collection of old sayings in his book, High As A Cat’s Back, Low As A Snake’s Belly and Tall Tales And Short Stories from The Shady Side of Pine Mountain. Still there is another story to be told — his fascination with coal mining.

“Coal mining was in my blood,” Sanders shared. “My father, grandfather and several of my uncles were coal miners at one time or another.” Growing up in the head of 15 Holler in McRoberts in the 1940s and 1950s, he recalls watching mules pull cars of coal out of a small truck mine near the mouth of the hollow. “The muleskinner would unhitch the mule when it got to the pit mouth and the mule would go about 20 feet around the hill and wait. The car would coast another 40 feet and dump the load into a hopper. The muleskinner would then back the mule up to the empty car and hitch to it and go get another load.” He also recalled how a neighbor in the holler went up on the hill behind his house with a pick and shovel and wheelbarrow and opened up a coal bank for house coal. He would then take a breast auger and drill holes in the coal seam and load it with dynamite. He would shoot a cut and then load it with a shovel into a wheelbarrow and dump it into a chute that would take it down the hill to his coalhouse.

Sanders recalled watching his uncle, Lee Peterson, doing the daily service to his carbide lamp. “He would take it apart and load carbide granules in the bottom compartment then put water in the top compartment. He would adjust the drip of the water into the lower chamber that made acetylene gas then ignite the gas with a whisk of the flint wheel on the reflector plate. At one time Uncle Lee operated a truck mine at Shea’s Fork in McRoberts and he gave me a job of making clay dummies used for tamping the dynamite they used to blast the coal. The coal was hand loaded with shovels and taken outside with mules pulling a car on a track. I was about 12 years old and he showed me how to roll a page of newspaper into a cylinder and crimp the end then dig clay dirt under my home to fill the cylinder good and tight then crimp the other end. Each week he would bring me another stack of newspapers and a box to be filled. He paid me a penny each and that was the most money I had ever earned. Even as a kid I felt that I had a pretty good knowledge of how coal was mined and I was fascinated with every aspect of mining but I had no thoughts of ever becoming a coal miner — it is strange how life takes many twist and turns.

“When my Uncle Lee retired sometime in the early 1980s after working 40 years in the small mines and the big Consolidation Coal Company mines and later the Beth-Elkhorn mines he sat down and reminisced about his career. He started writing and came up with a list of more than 50 coal miners he had known in his lifetime who had been killed in coal mining accidents. There is documentation of nearly 500 coal miners in Letcher County who were killed in coal mining accidents. Growing up in a coal mining community too often there was news that another coal miner had been killed. Typically, the widow had to continue raising her young family with a welfare check,” he recalled.

Sanders was graduated from Jenkins High School in 1959 at the age of 17. “A month later I was working in a factory in Cleveland, Ohio. Six months later when I became 18, I registered for the draft. By that time I was having second thoughts about life in the big city. The money was good but it was not home. My roots in the mountains of eastern Kentucky ran deep. A few months later I met with an Army recruiter and in April I was at Fort Dix, New Jersey and by mid-summer I was at Fort Gordon, Georgia. Shortly before I turned age 19, I was at an Army base near Harrogate, England. I remember my first night there recalling the events that had occurred during the past year. I looked up at the moon and tried to figure out where I was relative to my home in Kentucky. I was 5,000 miles from home; I felt like I was on the other side of the world. It would be another 2½ years before I would return to my home in McRoberts,” he recalled.

“I got back home in the spring of 1963 and I had no direction. I knew that the big city life was not for me and I had had enough of the military life. Then fate intervened; I got an opportunity to work in a coal mine for Beth-Elkhorn Corporation. At Mine 24 they utilized conventional mining technique by undercutting the coal and blasting it with dynamite. A loading machine was used to load the coal into a shuttle car which hauled it to the belt conveyor that took the coal to the outside. The dynamite was made from sawdust and nitroglycerine. The air was filled with smoke almost all day and after I had breathed it a while I got sick and vomited. I remember thinking, ‘are you sure you want to become a coal miner?’ but I knew it was a great opportunity so I stayed with it even though I got a headache from breathing the smoke every day,” Sanders recalled.

“After a couple years Eileen and I got married; she had completed two years of college at Midway Junior College and enrolled at Pikeville College to continue her education toward obtaining a teacher’s degree. Each day she would go to college and I continued working in the coal mine. We then pulled up roots and moved to Lexington. I learned right away that jobs in Lexington didn’t pay nearly as good as union coal mine wages,” Sanders remembered. “After obtaining her degree in elementary education she taught school at Johnson Elementary for four years and I continued working various jobs. We probably could have made a decent living there but it wasn’t home. The hills of eastern Kentucky were calling me, so in 1971 we moved back to McRoberts where both of our families lived. I hired in again with Beth-Elkhorn Corporation at Mine 26. It was a new mine that had been in operation only about five years but two men had already been killed there in mining accidents. I remember thinking, ‘are you sure you want to start coal mining again?’ but I stayed with it.”

In his 25-year mining career Sanders said that he had worked several different coal mines and mining ventures. He was often emotional as he shared his memories of having known several coal miners who had been killed in accidents. He shared his recollections of the time he was superintendent at a small mine in Pike County that was so dangerous that he ‘Dangered Off ’ every working place in the mine and quit. The owner continued trying to hire men to work there. They might work a day or two and quit. The conditions deteriorated so fast that he was unable to retrieve the equipment. The equipment is still buried there today.

Sanders said that when he was 50 years old he knew that he needed to make a change in his career. “I was fortunate to get a job as a federal coal mine inspector where I worked for 15 years to finish my mining career but that is another story,” he said with a smile. “If you invite me back to your meeting again I will share that memory with you.”

Sanders and his wife, Eileen, are both retired and live in Jenkins.