Keep foxes away from the hens

By MIKE CALDWELL
The (Danville) Advocate-Messenger 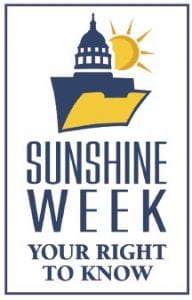 Everyone was talking about the total eclipse in 2017, but the Kentucky Legislature is trying to create its own version this year by shielding local governments and school districts from much needed “sunshine.”

This is the first step toward leaving the public in the dark.

And the timing couldn’t be more ironic.

This week is National Sunshine Week.

Started 13 years ago, Sunshine Week is “a national initiative to promote a dialogue about the importance of open government and freedom of information,” according to the organization. “… Sunshine Week seeks to enlighten and empower people to play an active role in their government at all levels, and to give them access to information that makes their lives better and their communities stronger.”

Kentucky’s House of Representatives must not agree.

House Bill 200, the state budget, includes language that would allow school districts and cities to move public notices from newspapers to their own websites.

In addition to excluding countless citizens who don’t have consistent computer and Internet access, this is a classic example of the “fox guarding the hen house” analogy.

If you aren’t familiar with that expression, just ask someone how it works out for the chickens.

The Senate is starting to work on its own budget and we hope to see this effort eliminated.

As a refresher, from 2002 to 2016, school districts were allowed to put their financial statements on the district’s website instead of in the newspaper. Or they could choose to place a copy at the local public library for 30 days.

In 2016, the Gov. Matt Bevin vetoed this language. For the last two years, school districts have had to publish their financial statements in newspapers.

But the House kept the vetoed language in its basic budget template and is pushing this once again, likely because of lobbying from some administrators who cannot see the forest for the trees.

“I can guarantee you the school districts told House members it is an expensive venture to put these in newspapers,” David Thompson, executive director of Kentucky Press Association, explained to members.

“I counter with this: Find out how much you charged the school district last fall to publish the financial statement and then see how much you paid in school taxes. From some examples I’ve seen, the taxes paid are 10 times the cost of publication and that’s a pretty good return on the investment for school districts.”

Newspapers have many roles within the community, but fighting for transparency and accountability of public institutions and how they spend taxpayer dollars are among the most important.

Not only is it our job, it is one of the fundamental responsibilities we have to our readers and the communities we serve.

Openness and transparency of government are the foundation of democracy. The idea that a select few should control when and how vital public information gets shared is flawed and counter to every principle our nation was built on.

For that, we need all the light we can get in Frankfort and every community across the Commonwealth.