Keeping cool this summer will cost $$ for some 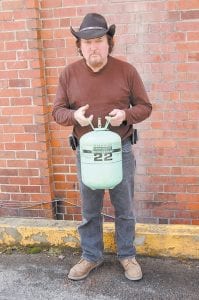 Joe Shelton, owner of Shelton Heating and Cooling, holds a canister of Freon R-22. Local air and heating repairmen and contractors are warning of extremely high prices users of the product will face later this year.

Three Letcher County air-conditioning and heating contractors are concerned that the escalating cost of Freon R-22 will place a hardship on residents whose air conditioning units need a replenishing of the gas refrigerant.

“It’s a bad timing with people out of work,” sad Bobby Howard, owner of Bobby Howard & Sons Heating and Cooling. “They want to Band-Aid them up to keep from buying new units.”

The U.S. Environmental Protection Agency (EPA) has slowly been phasing out this ozone-depleting gas since 2005.

“It’s slowly leaking into the atmosphere,” said Joe Shelton, owner of Shelton Heating and Cooling. “R-22 was developed in the 1940s. It has been the prime choice for 70 years.”

In 2010, equipment could no longer be manufactured if it uses R-22. The amount of the coolant made available was greatly reduced, and by 2015 Freon will be phased out by 95 percent.

Shelton predicts that customers will be shocked with the increased costs and he is concerned for those on fixed incomes, disabled and retired.

Some people won’t realize that their units are low on Freon until the first couple of hot days arrive.

Howard said heat pumps will use auxiliary heat during the winter if a unit is low on R-22.

“A lot of people don’t know Freon is gone until they flip it over on AC,” said Howard. “Then you tell them what it is going to cost.”

An average heat pump holds six to eight pounds of R-22. Having more Freon added to a unit used to be a quick, cheaper way to temporarily fix a unit.

“If a piece of heating and air has to have refrigerant every summer, there is a leak in a coil and they should get it replaced,” said Shelton. “If you have to put air in your tires every month, you know it is leaking.”

Shelton said breaking down a piece of equipment and getting it fixed is expensive.

“You need to weigh the costs of fixing the system or going to a new system,” he said.

Tim Breeding, owner of Breeding’s Plumbing and Electric, said he has sold a lot of new heating and cooling equipment recently.

“If it is getting up in years, it is cheaper to replace them,” said Breeding.

Breeding said if a heat pump is leaking at least twice a year then the owner may want to consider replacing it. Customers have to make a decision of repairing a heat pump that is out of warranty or buying a new heat pump with a 10-year parts and labor warranty, he said.

Breeding said another refrigerant that can take the place of R-22 needs to be on the market before R-22 is completely phased out.

R-410A is a refrigerant that does not contribute to ozone depletion, but causes global warming, he said.

“It’s a lot less expensive, about a fifth of what R-22 costs,” said Shelton. “R-410A is here to stay awhile until they find something else.”

Shelton predicts that R-410A will be replaced at some point, too.

The other “hope” is a drop-in replacement for R-22.

“You have to take a recovery machine to vacuum (R-22) out and it goes into a tank,” said Shelton. “You don’t have to change the oil. It’s a simple process.”

“The complication is the compressor (manufacturer) is fighting this,” he said.

Copeland Compressor, who manufactures 70 percent of compressors installed in heat pumps, will void the warranty, Shelton said, if NU22, MO99 and 407C are dropped in to replace R-22.

“ If the warranty has expired, you don’t have a problem,” said Shelton. “Other manufacturers are not fighting it.”

Shelton said the alternates are performing just the same as R-22.

“I’m going to carry an alternative,” he said. “It will cost less.”

Breeding said prices dramatically increased for R-12, a refrigerant that was used in refrigerators and freezers, when it was phased out in the 1990s.

“The prices went out of sight,” said Breeding. “You could still get it for a period of time, but you had to pay a lot for it.”