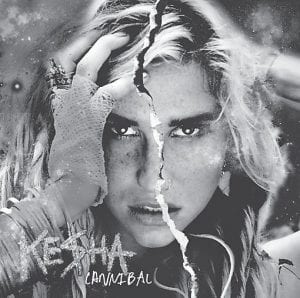 The cover of the latest by Ke$ha, “Cannibal,” is shown. (AP Photo/ RCA Music Group)

Some people were bothered when Ke$ha joked about brushing her teeth with Jack Daniels on her breakthrough song, the drunken party anthem “TiK ToK.” But it wasn’t that big of a deal.

However, on the singer’s new release, “Cannibal” — the companion to her January debut CD “Animal” — the 23-year-old takes it too far, and her desperation for attention and shock value is obvious.

On the title track, which starts with the singer panting like an animal, Ke$ha talks about drink- ing blood, eating a person’s liver, sucking teeth and using fingers to stir tea over a pulsating beat. While that’s already disturbing, Ke$ha continues with this: “Be too sweet and you’ll be a goner, yup I’ll pull a Jeff rey Dahmer.”

To compare yourself to a man who raped, killed and ate human beings is ridiculous. It isn’t cute — nor artistic. It’s sad — as is the rest of her nine-track CD, which is filled with vapid lyrics and battles any T-Pain album for most use of the Auto-Tune.

What makes things worse is that Ke$ha’s mother, Pepe, a songwriter who penned a song for Dolly Parton and also co-wrote tracks on Ke$ha’s debut album, is listed as one of the co-writers for the song “Cannibal.”

Ke$ha said in an interview in May with the Associated Press that “people will start to respect me as a writer.”