Kelah Eldridge expected to star at UPike next year 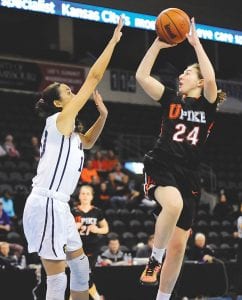 Sometimes the biggest stage brings out your best performances.

This was the case of UPike guard Kelah Eldridge.

She has been one of the most talented players on the Bears’ roster all season, but she shined brightest during the NAIA National Championship Tournament in Independence, Mo.

Eldridge dazzled in the tournament with her sharp shooting three point skills, but also showed the ability to drive to the basket and make play after play on offense and defense.

Eldridge emerged as the clearcut leader of the UPike team.

“Kelah Eldridge has emerged as one of the leaders on this team,” UPike coach Joanna McNamee said after the Bears knocked off Greater Falls to reach the Fab Four. “Kayla Day is our lone senior and is a leader, but Kelah (Eldridge) has been a leader all season as well. She has kind of become our Stephen Curry. She is quiet and shy and just a great girl, but when she needs to take over a game she can. She shoots with confidence and makes some tough threes. She has emerged as a leader on this team.”

Eldridge, a Letcher County Central High School graduate, helped the Bears to their most successful season in school history. UPike advanced to its firstever Fab Four and won a record 26 games in one season.

UPike started the season 17-0 and then went into a bit of a slump down the stretch of the season, but the Bears rebounded and made noise in the NAIA National Championship Tournament.

Eldridge made her presence known in the opening game. Against Wayland Baptist, she knocked down three threes on her way to 15 points, five rebounds, three assists and one steal in the 70-65 win.

She didn’t do it all by herself, though. That was the key. She knew when to be aggressive on offense and when to step back and let Aundrea Matchen go to work or Kandice Porter score inside.

That’s when her leadership skills begin to show to the NAIA and people around the country, not just the fans in Pikeville.

The next game, she had just as big an impact against Vanguard, while only scoring five points.

UPike trailed against Greater Falls in the third game, but Eldridge’s three-point shooting and ability to take over a game prevailed once again as the Bears pulled out the 75-68 win to advance to the Fab Four.

In the national semifinal game, UPike struggled out of the gate. The Bears were five of 31 from the floor in the first half and trailed by as many as 17 points in the second half.

That’s when Eldridge stepped up again. She got hot from three once again and led UPike to within four late in the game, but the Bears just couldn’t get over that hump.

“I’m just really emotional right now,” Eldridge said after the loss to MidAmerica Nazarene. “I love every single girl on this team and I am so happy for how we played together. I just wish our season didn’t have to end. It’s not the outcome we wanted, but I love this team and proud of of effort.”

She put her team first even in the loss.

UPike only loses one senior this season and will have big expectations for next season.

Look for Eldridge to lead them toward their goals of another NAIA National Championship Tournament run.

Randy White is sports editor of Appalachian News-Express in Pikeville, where this report first appeared.