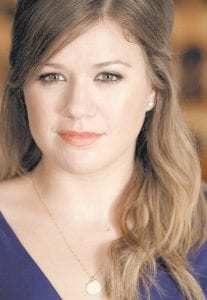 It may have taken some time, but Kelly Clarkson seems to finally have released an album without any drama on the side.

“Everything is good, everything is happy,” she said, laughing brightly during a recent interview to promote “Stronger,” released last week.

It’s a different scenario than her last two albums: She went through public disputes with legendary executive and mogul Clive Davis over her third album and with OneRepublic singer-songwriter Ryan Tedder after her last album was released.

They were typical of the bold stances she’s taken that proved her to be more than the passive, malleable product of a hit TV competition, establishing her as an artist instead of just a voice.

“ I’ve been a fighter since I started walking,” she said, adding casually and genuinely a line that could be lifted from one of her inspirational songs: “We get one life. You want to make sure that you’re living it how you want to live it.”

Since Clarkson became the first “American Idol” a decade ago, she’s established herself as one of pop’s most formidable, and successful singers. She’s sold over 20 million albums worldwide and landed seven singles in the Billboard Hot 100 top 10, including “Breakaway,” ‘’My Life Would Suck Without You,” “Miss Independent,” and perhaps her biggest hit, “Since U Been Gone.”

Clarkson has maintained creative control of her music and career since her “Idol” days, and has written on all of her albums. But her determination to chart her own course has not come without a few battles. In 2007, Davis became concerned over the less commercial sound of Clarkson’s third album, “My December,” which Clarkson revealed publicly after rumors of a rift; Clarkson later mended fences and called the tension overblown. Then in 2009, Clarkson called out Tedder for musical similarities between “Already Gone,” which he wrote for Clarkson, and Beyonce’s “Halo,” which he also wrote.

Clarkson calls her new collection of 13 songs “the easiest record that I’ve made with my label.” But she makes clear that’s because the suits bent to her will — not the other way around.

Sonically, “Stronger” doesn’t tinker much with the formula that has helped Clarkson become the topselling “Idol” artist ever, blending clean pop-guitar riffs with contemporary dance synths. But there is an undertone of loneliness and sadness coursing throughout, including some downbeat lyrics co-written by Clarkson herself.

“Hello, is anybody listening? Won’t somebody show me that I’m not alone,” she sings on “Hello.”

“If you look at my whole catalogue, there are far more sadder songs than happy,” the Texan acknowledges in her Southern drawl. “But that’s only because writing is a form of therapy. So obviously the things that you’re getting out are the things that you’ve been going through and struggling with. You want to keep all the happy inside. If I’m going through a hard time, I write it out.”

In person, Clarkson is bubbly and quick to laugh, sharing that in her time off, she picked up the violin and started learning Italian with Rosetta Stone. “I’m horrible at it so far,” she laments lightly.

But she never comes close to revealing the subject of “Stronger’s” multiple scornful breakup and kiss-off songs. “You don’t know a thing about me,” she sings on the first single, “Mr. Know It All.” And it’s true that the 29-year-old retains an enigmatic air, despite her down-to-Earth image.

Toby Gad, who co-wrote and produced two songs on “Stronger,” had planned on a 10-minute meeting with Clarkson when the two first met, but ended up at a twohour dinner.

“She’s a very strong survivor, and very organic and very real,” he said. “You can connect with her on a very human level.”

Still, after the dinner and several days of revising lyrics alongside the pop star, he said he doesn’t remember if she ever mentioned her own relationships to him.

While Clarkson seems to sing almost exclusively about the ups and downs of love, her songs are often deceptively universal. Clarkson says “Mr. Know It All” could apply to her own record label or to the media, and Gad’s “The War Is Over” functions as a coda to a romance or to an actual war.

“That’s the underlying theme for her, to vent emotions that we all feel in our relationships,” Gad said.

And Clarkson will continue to vent as she sees fit.

“I’m always vocal,” she said. “People ask me and I tell them. If I have a problem, I say it. I’m never malicious about it, I just say what happened. And I think a lot of people don’t do that. So I think it maybe catches people off guard. But I don’t know any other way to be but honest — musically or personally. So I guess that just comes through.”