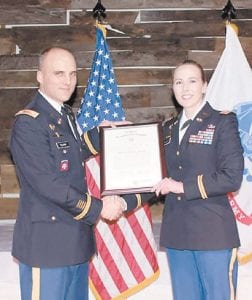 Cumberland native Kendra T. Tippett took the oath to become a lieutenant colonel in the U.S. Army in a special ceremony held Jan. 22 at the Benham Schoolhouse Inn. The oath was administered by a longtime friend, LTC Thomas Tolman. Seventy five to 80 guests attended the ceremony.

Tippett is serving as the executive officer for the Operations Support Division at the Human Resources Command at Fort Knox. She has served in Afghanistan, Uzbekistan, Qatar, Korea, England and several posts within the U.S. during her 17-year career. LTC Tippett holds a Bachelor of Science Degree in Criminal Justice, and a Master’s Degree in Information Technology Management.

LTC Tippett, a daughter of Juanita and Roy Tippet of Cumberland, and was graduated from Cumberland High School and Eastern Kentucky University.