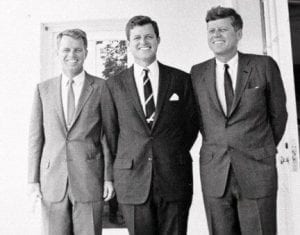 Sen. Edward M. Kennedy, a longtime supporter of Appalachia who has held Senate hearings in Letcher County, was diagnosed with a cancerous brain tumor Tuesday in what could be the grim final chapter in a life marked by exhilarating triumph and shattering tragedy. Some experts gave the liberal lion less than a year to live.

Doctors discovered the tumor after the 76-year-old senator and sole surviving son of America’s most storied political family suffered a seizure over the weekend. The diagnosis cast a pall over Capitol Hill, where the Massachusetts Democrat has served since 1962, and came as a shock to a family all too accustomed to sudden, calamitous news.

“Ted Kennedy and the Kennedy family have faced adversity more times in more instances with more courage and more determination and more grace than most families have to,” said Sen. John Kerry, DMass. “Every one of us knows what a big heart this fellow has. He’s helped millions and millions of people – from the biggest of legislation on the floor to the most personal.”

Kerry added: “This guy is one unbelievable fighter.”

Kennedy has spent most of his career fighting for the nation’s working class and poor. In the early 1980s, he held a Senate hearing in Fleming-Neon that brought attention cuts made during the Regan administration that affected poor people and the programs that supported them. His brother, the late Robert F. Kennedy, also visited Letcher County and Fleming-Neon in 1968.

Kennedy’s doctors at Massachusetts General Hospital said he had a malignant glioma in the left parietal lobe, a region of the brain that helps govern sensation, movement and language.

Seizures can be caused by a wide variety of things, some of them relatively minor. The finding of a brain tumor – and specifically a glioma, an especially lethal type – was about the worst possible news.

Kennedy’s doctors said he will remain in the hospital for the next couple of days as they consider chemotherapy and radiation. They did not mention surgery, a possible indication the tumor is inoperable.

Outside experts gave him no more than three years – and perhaps far less.

“As a general rule, at 76, without the ability to do a surgical resection, as kind of a ballpark figure you’re probably looking at a survival of less than a year,” said Dr. Keith Black, chairman of neurosurgery at Cedars-Sinai Medical Center in Los Angeles.

In a statement, Dr. Lee Schwamm, vice chairman of neurology at Massachusetts General, and Dr. Larry Ronan, Kennedy’s primary physician, said the senator “has had no further seizures, remains in good overall condition, and is up and walking around the hospital.”

“He remains in good spirits and full of energy,” the physicians said.

An Associated Press photographer who was given access to the senator on Tuesday captured Kennedy, dressed in a gray sweater and dark slacks, joking and laughing with family members as he sat at a table in a family room at the hospital.

Kennedy’s wife since 1992, Vicki, and his five children and stepchildren have been at his bedside.

“Obviously it’s tough news for any son to hear,” said Robin Costello, a spokeswoman for one of Kennedy’s sons, Rep. Patrick Kennedy, D-R.I. “He’s comforted by the fact that his dad is such a fighter, and if anyone can get through something as challenging as this, it would be his father.”

Kennedy, the Senate’s second longest serving member, was re-elected in 2006 and is not up for election again until 2012. Were he to resign or die in office, state law requires a special election for the seat 145 to 160 days afterward.

Kennedy has left his stamp on a raft of health care, pension and immigration legislation during four decades in the Senate.

Senators of both parties heard about Kennedy’s condition during their weekly, closed-door policy lunches, and some looked drawn or misty-eyed.

Sen. Robert Byrd, D-W.Va., the longest-serving member of the Senate, wept as he prayed for “my dear, dear friend, dear friend, Ted Kennedy” during a speech on the Senate floor.

“Keep Ted here for us and for America,” said the 90-year-old Byrd, who is in a wheelchair. He added: “Ted, Ted, Ted. My dear friend. I love you and miss you.”

“I’m really sad. He’s the one politician who brings tears to my eyes when he speaks,” said former Sen. Bob Kerrey, D-Neb., who happened to be in the Capitol.

Malignant gliomas are diagnosed in about 9,000 Americans a year. In general, half of all patients die within a year.

“It’s treatable but not curable. You can put it into remission for a while but it’s not a curable tumor,” said Dr. Suriya Jeyapalan, a neuroncologist at Beth Israel Deaconess Medical Center in Boston.

The Kennedy family has been struck by tragedy over and over. Kennedy’s eldest brother, Joseph, died in a World War II plane crash; President John F. Kennedy was assassinated in 1963; and Sen. Robert F. Kennedy was assassinated in 1968. The tragedies thrust “Uncle Teddy” into the role of surrogate parent to his brothers’ children. He walked Caroline Kennedy down the aisle.

A high point in his life came in 1980, when Kennedy challenged Jimmy Carter for the Democratic presidential nomination. He eventually bowed out with a stirring speech in which he declared, “The cause endures, the hope still lives and the dream shall never die.” His eulogy for his brother Robert was equally stirring.

The low point was 1969, when Kennedy drove a car off a bridge on Chappaquiddick Island on Martha’s Vineyard. The accident killed aide Mary Jo Kopechne. Kennedy at the time was married to his first wife, Joan, whom he later divorced. His failure to promptly report the accident, and questions about his relationship with the young woman, may well have cost him the presidency.

Kennedy has been active for his age, maintaining an aggressive schedule on Capitol Hill and across Massachusetts. He has made several campaign appearances for Sen. Barack Obama.

“He fights for what he thinks is right. And we want to make sure that he’s fighting this illness,” Obama said Tuesday. “And it’s our job now to support him in the way that he has supported us for so many years.”

Sen. Hillary Rodham Clinton said: “Ted Kennedy’s courage and resolve are unmatched, and they have made him one of the greatest legislators in Senate history. Our thoughts are with him and Vicki and we are praying for a quick and full recovery.”