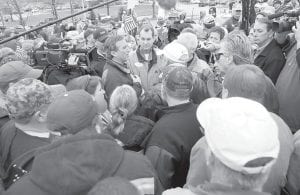 Robert Kennedy Jr., the son of the late Sen. Robert F. Kennedy, spoke to coal miners opposing his call for an end to mountaintop removal mining on Coal River Mountain at a rally outside the headquarters of the state Department of Environmental Protection in Charleston, W.Va., on Monday. (AP Photo)

Robert F. Kennedy Jr. said this week that mountaintop removal mining in Appalachia is a crime, and that if the American people could see it, there would be a revolution.

“We are cutting down the Appalachian Mountains, these historic landscapes where Daniel Boone and Davy Crockett roamed that are so much a part of American culture,” the environmental attorney said at a rally Monday to stop blasting on southern West Virginia’s Coal River Mountain.

“It’s God who made these mountains, and it’s (Massey Energy chief ) Don Blankenship who is cutting them down,” Kennedy said.

Kennedy spoke as some 300 environmental activists cheered. At the same time, 200 coal miners jeered. The groups were kept apart by a line of state troopers and metal barricades.

The Virginia-based Massey plans to blast and mine thousands of acres atop the mountain, which has enough coal reserves to feed power plants for 14 years. Organizations including Coal River Mountain Watch and Climate Ground Zero want Massey to stick with underground mining and allow the ridges to be turned into a 200-turbine wind farm.

Before taking the stage, Kennedy waded into the crowd of shouting miners and spent a halfhour debating Massey Vice President of Surface Operations Mike Snelling and others.

“He’s very passionate about what he was doing and I have to give him enough credit for walking through a crowd of a lot of people he would consider adversaries,” Snelling said. “He just keeps talking about the environment and the concern for the environment and the mountains of Appalachia, and what we tried to tell him is that we are just as concerned about the mountains — or more than he is, for the fact that we live here.”

The rally, held outside the state Department of Environmental Protection headquarters, was the latest of several demanding a halt to blasting on Coal River Mountain, which Massey calls contour and highwall mining, not mountaintop removal.

In mountaintop removal, for- ests are clear-cut. Explosives blast apart the rock, and machines scoop out the exposed coal. The earth left behind is dumped into valleys, covering intermittent streams.

Coal operators say it’s the most efficient way — in some cases, the only way — to reach some reserves. They also argue they reclaim the land so it can be redeveloped. Critics say the land is ruined forever, and that people, property and the environment suffer unnecessarily.