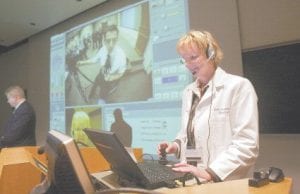 Doctors in Louisville are using a robot to help them remotely treat patients in western and central Kentucky.

James Paul Higdon, 80, who sought care recently at the Owensboro hospital became the first stroke patient to benefit from the new partnership between University of Louisville Health Care and Owensboro Medical Health System.

A monitor sat on top of an armless torso showing the face of Dr. Kerri Remmel, director of the stroke center at University Hospital in Louisville, more than 100 miles away from the Owensboro hospital.

“It was just like her walking into the room. She did a neurological exam. She asked him to lift his arm, stick out his tongue. She talked to us as a family,” said Higdon’s daughter, Regina Coomes, 59, of Owensboro. “It was just unbelievable that a doctor in Louisville could look at my dad in Owensboro. Just amazing.”

Called RP-7 and sold by InTouch Technologies of California, the robot system is the first in Kentucky and one of about 130 in use worldwide.

The robot lets physicians consult with patients, observes vital signs on monitors and checks hearts, blood-pressure readings or sonograms. Specialists control the system from Louisville with laptops and joysticks and get help from doctors or nurses in the hospital where patients are being treated.

“I can listen to heart sounds; I just need someone to put the stethoscope on a patient’s chest,” Remmel said. “What it allows those outside hospitals to do is to extend the services they’re offering.”

Officials say the system is one answer to Kentucky’s doctor shortage, which is particularly acute in rural areas.

Although 43 percent of the state’s population lives in rural areas, only 23 percent of its doctors practice there. And many experts and specialists are clustered in urban areas such as Louisville and Lexington.