By MONICA SPEES
The Daily News 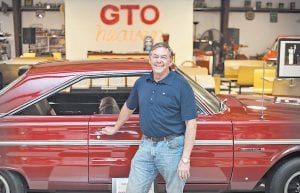 Phil Wheeler stands in his showroom in Bowling Green, Ky. Wheeler’s garage at his home has become an attraction for car enthusiasts, which makes sense because he has about 40 cars in his showroom and about another 50 cars that he hasn’t restored yet in another building. (Miranda Pederson/Daily News via AP)

Phil Wheeler’s garage at his home has become an attraction for car enthusiasts over the years, which makes sense because he has about 40 cars in his showroom and about another 50 cars that he hasn’t restored yet in another building.

A large sign on Wheeler’s garage behind his house in Warren County says “GTO Heaven.” Inside, in addition to the cars, are about 50 motorcycles, including the one he and his late wife, Debbie, rode when they dated in the 1960s; a cafe with booths, tables and stools; dozens of photos from his motorcycle trips with Debbie and from his races at Beech Bend Raceway; car paraphernalia and Beatles memorabilia.

Wheeler’s attraction to cars started when he was young and tinkered with cars. When Wheeler was 14 years old, his brother bought a new 1965 GTO to drive in races. Wheeler and his brother worked out a deal that if Wheeler fixed the car after it endured the abuse of the races, he would get to take it out on weekends. 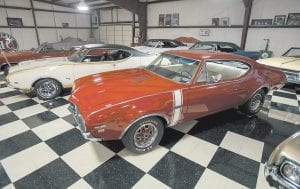 He first restored a car in 1970 after trading a new Road Runner and $300 for a 1956 Oldsmobile from one of his high school friends. That car is displayed prominently in the showroom near the entrance.

About a decade later, remembering how simple and fun he thought restoring the Oldsmobile was, Wheeler bought a 1967 GTO. After that, he was hooked. Even after Wheeler realized he could make money restoring old cars and reselling them, he said he puts so much work into the cars that he doesn’t always want to sell them, hence the magnitude of his showroom.

Although Wheeler is a GTO man, he said one of his favorite cars in the showroom is a glistening red 1958 Corvette that his wife bought three years ago. Wheeler said she haggled the former owner down $8,000 for the car.

“She said, ‘ You’re going to restore that car for me,’ and I said OK, because that’s what husbands are supposed to say. … That’s how I stayed married for 46 years,” Wheeler said with a laugh.

“We were just two kids in love,” Wheeler said.

Debbie was diagnosed with pancreatic cancer last year and died less than a month after the diagnosis.

Wheeler said he and his wife often went into the showroom together to talk and take care of the cars.

“It was our solace, our solitude up here,” Wheeler said. “… This was just as much hers as it was mine. She put a lot of work into it.”

The Wheelers had two children and seven grandchildren. Wheeler said his 8- and 5-year-old granddaughters love going into the showroom, where they play hideand seek and “hide the money,” when Wheeler hides 20 $1 bills in various places throughout the showroom and lets the girls find them.

Max Wheeler, now 20, said he’s “always been a Dodge fan” and that was why he picked the Challenger to restore. He said his grandfather taught him about bodywork, a skill he may use later in life if he decides to restore another car. Max Wheeler’s Challenger is sitting in Phil Wheeler’s showroom with a photo album on its hood that shows every step of the process.

“I don’t drive it that often because I don’t want anything to happen to it,” Max Wheeler said.

Regardless of the car’s monetary value, Max Wheeler said he can’t put a price on the experience.

The car is “priceless to me,” Max Wheeler said. “… It means a lot to me that I have something that I’ll always be able to remember him.”

Phil Wheeler worked in real estate for more than three decades and retired 13 years ago. He recently started a job as the manager of the National Corvette Museum’s vehicle maintenance and preservation department at the behest of NCM Executive Director Wendell Strode, his friend of many years. Strode knew Wheeler had a penchant for cars and has called him several times over the years to arrange visits from car club members at his showroom after they have already seen the NCM and the General Motors Bowling Green Assembly Plant. Strode once sent a group of 90 people to Wheeler’s home.

Daniel Decker of Grayson County works at the NCM with Wheeler.

“Any day I can come to work with Phil, I’m doing great,” Decker said.

Decker said he understands Wheeler’s attraction to cars because the eight cars that he has are special to him.

“Each one has some sort of story,” Decker said. “Every one of his cars are part of something in his past.”

Decker has known Wheeler since the mid- 1990s when Decker sold Wheeler a red 1964 Polara. While working with Wheeler, Decker has learned more about the importance of attention to detail.

“Once he decides on it, he goes overboard with it until it’s just like it was when it came off that showroom floor,” Decker said.

“It gives me a sense of accomplishment,” Wheeler said. “I can actually come here at the end of the day and see the fruits of my labor.”

None of Wheeler’s children or grandchildren has taken a heavy interest in cars, but Wheeler said he hopes he lives long enough to work on a car for each of his grandchildren and that the rest of his collection makes others happy after he’s gone.

“I look at everything as everything is on loan,” Wheeler said. “This will all belong to somebody else someday. And this museum, kids will play basketball in here or something someday. You don’t know what tomorrow brings.”