Kentucky has long way to go to catch ’Bama 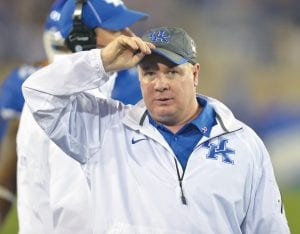 After covering college football the past 1-1/2 months from the comfortable confines of the Commonwealth Stadium press box I am convinced strongly of two things:

No. 1 — The Associated Press Top 25 teams in college football are special. The University of Kentucky has played four of them now, and there is a sizable separation in pure raw football talent between most of those 25 teams and the remainder of the NCAA Division 1-A programs.

No. 2 — There is Alabama Football and there is a rare and sizable separation between the Crimson Tide and the rest of the other top 24 college football programs.

First-year coach Mark Stoops and his band of battered and bruised Wildcats now know much better than I do the separation that exists between Alabama, the rest of the top 25, and UK football. While it was thought that gap was closing in recent weeks with strong efforts by the Cats against Louisville, Florida, and South Carolina, I have readjusted my opinion since the Tide rolled over the Wildcats, 48-7, last Saturday night.

Let’s just say that several ugly sores were revealed on the body of work UK must complete to reach top 25 status, and I doubt UK football will ever reach the level where Alabama is now.

On Sunday evening, when the Associated Press released its most recent poll, two more SEC teams crawled into the top 25, giving the nation’s most elite college football playing conference a grand total of eight in the top 25 this week. That’s why the SEC is at times affectionately called Big Boy Football, and I’m betting a couple of the teams could give the NFL’s Jacksonville Jaguars all they want for 60 minutes.

Now Coach Stoops and his Cats get 12 days to lick their wounds and heal up both physically and mentally before the second-half stretch run starts in Starkville, Mississippi on Oct. 24, a Thursday night game on ESPN. Thankfully the Cats second-half schedule offers several comparable opponents in size, speed, and athleticism that could provide an opportunity for some W’s for Stoops to build on as he and his coaching staff push toward finishing off their second good recruiting class this coming February.

I will talk more next week on how I think UK will finish the last half of the season.

Those of you who braved the weather elements for three days and nights outside Memorial Coliseum at the annual Wildcat camp-out have been set for well over a week now with your free tickets. The rest of Big Blue Nation will have to rely on in-state TV stations to provide them with an opportunity to witness the activities. Coverage begins on WYMT-TV in Hazard and WKYTTV in Lexington at 7 p.m., and goes all the way to 10 p.m. Some national TV networks like ESPNU will incorporate a portion of UK’s festivities into their live coverage of seven other college basketball grand openings across America. Fox Sports South will also be televising some of the festivities from Rupp Arena Friday night.

Many national college basketball analysts are picking the UK men’s team as pre-season No. 1 or No. 2, while the women’s team is being projected as a solid top 10.

While Friday night will be mostly a plethora of organized fun and games for the fans’ enjoyment, the first real showcase of Cal’s super recruiting class in game-type action will be in the Blue-White scrimmage for charity on Oct. 29 at Rupp Arena. Tickets still remain for the Blue-White scrimmage and can be obtained through Ticketmaster.com or by calling 1800-745-3000.