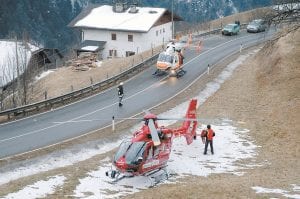 As some patients are being held liable for big bills from air ambulances, a Kentucky House of Representatives panel has approved a bill calling for a study of Med-evac charges. (Shutterstock)

“Increasingly, the service also can mean the difference between getting well at a price you can afford or at a price that could push you over a financial cliff,” Trudy Lieberman writes for Rural Health News Service. “Air ambulances have become the centerpiece of a nationwide dispute over balance billing, a practice that requires unsuspecting families, even those with good insurance, to pay a large part of the bill.”

Last week, the state House Banking and Insurance Committee approved a bill calling for a study of airambulance charges. House Bill 273 was sponsored by Rep. Tom McKee, D-Cynthiana, “after a constituent of McKee’s was transported to the hospital via air ambulance after a fall, but it was an unexpected bill for thousands of dollars not covered by insurance which really knocked him off his feet,” Don Weber reports for cn|2’s “Pure Politics.”

“ McKee says having more information about emergency care transportation may have allowed the individual to avoid the high cost,” Weber reports, quoting him: “I have learned in looking at it that certain airambulance companies provide a subscription service for perhaps as little as $50 a year, that you can have coverage to know if you need to be transported, the full cost would be paid. As we move forward, I think we’re going to learn a lot more to at least inform people.”

McKee said the charges, which can run well into five figures, may seem huge “but those air-ambulance companies have to keep people on duty and have to have a full crew ready to go at a moment’s notice. But, I think as citizens, we all need to know where we are in regard to being transported and things like we’ve learned, a subscription service could be available.”

Some committee members said they want to see if the charges are justified. “It’s nice to know what the cost is, $40,000, but if it only costs them $8,000 to do it,” said Rep. Steve Riggs, D-Louisville. “So we have to learn more than just what the average retail cost is, we have to also learn more about what the profit margin is.”

Lieberman reports that your air-ambulance bill may not be covered “because the provider is not in your insurer’s network,” but “Sometimes it’s impossible to tell if a provider belongs to a network or not. When you are wheeled into the operating room, are you going to ask the anesthesiologist if he or she belongs to the hospital’s network? How many accident victims suffering from trauma are going to direct EMS workers to check if the air service is in or out of network before they’re lifted to a hospital? You can also get stuck even if the ambulance company is in the network. An insurance payment may not come close to covering the cost.

“Rates ambulance companies charge private patients are much more than they are charging to Medicare or Medicaid,” whose rates are too low to suit the companies.

Consumers Union Programs Director Chuck Bell told Lieberman. “The air ambulance industry has grown rapidly, and prices have shot up a lot with some companies trying to make a quick buck.”