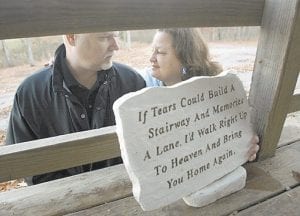 Dennis LeFan (left) and Jamie King (right) of Dycusburg, Ky., are shown in this photo. The couple lost their daughter Andrea LeFan, to a car wreck while driving to a waitressing job from her home in Dycusburg in June 2006, when a Trans Am speeding down a winding road struck her Chevy head-on. Doctors think Andrea LeFan’s life may have been saved if there was a trauma center nearby. (AP Photo/Courier Journal)

The University of Louisville, the University of Kentucky and their associated hospitals are the only Level 1 trauma centers in the state. They provide roundthe clock trauma care, specialists and anesthesiologists, education and research.

The state has one Level 3 center: Taylor Regional Hospital in Campbellsville, which performs emergency surgery and assesses, stabilizes or resuscitates patients before transferring them to a higher-level center.

“We’re behind a lot of states in the U.S.,” said Dr. Mary Fallat, chief of surgery at Kosair Children’s Hospital in Louisville.

Besides having too few centers, Fallat said, difficult terrain can cause delays getting to them when bad weather grounds helicopters. Sometimes patients are taken to nearby hospitals with little access to specialists.

“In some of these small ERs, they’re lucky to have a physician, period,” said Nancy C. Galvagni, senior vice president of the Kentucky Hospital Association.

The hospital association and many local physicians are pushing the legislature to establish a trauma system.

Not only is there wide support among the medical community, a 2004 survey by the Kentucky Board of Emergency Medical Services found that 79 percent of the public wants one. But financial concerns have kept it from becoming a reality.

Statewide starting costs are estimated at $5 million, and ongoing costs would also include paying for educating health professionals and hiring a trauma coordinator.

The Kentucky House approved a trauma system bill last year but it died in a Senate committee.

“The problem with it has always been funding,” State Rep. Bob DeWeese, R-Louisville, said. “Some other states have increased fees, but I don’t think the legislature is in the mood to do that right now.”

Some rural physicians worry that more trauma centers may mean more work but not more pay.

“To be honest, I would be happy not to see another trauma patient as long as I live. … I have no desire to set up a trauma center here and keep (such patients) here,” said Dr. Daniel Howard, a general surgeon from Paducah who is on call every fourth night for one hospital and about every eighth for another.

Jamie King is convinced the lack of a trauma center in western Kentucky is what killed her 16- year-old daughter, Andrea LaFan.

LaFan was driving to a waitressing job from her home in Dycusburg on June 5, 2006, when a Trans Am speeding down a winding road struck her Chevy head-on. LaFan was airlifted to a Level 2 trauma center, Deaconess Health System in Evansville, Ind., arriving 80 minutes after the wreck. Doctors couldn’t save her.

“If she were hurt in Louisville, it is very possible she would have lived,” said Dr. William Barnes, a western Kentucky physician who examined her medical records. “But she definitely had no chance where she was.”

Dr. Wayne Meredith, medical director of trauma programs for the American College of Surgeons, said trauma costs about $80 billion a year and is the leading cause of death in patients under 44.

“And the most effective treatment we know for this today is developing a trauma system,” Meredith said. “It’s as effective as the law requiring seatbelts.”

Information from: The Courier Journal, Louisville.