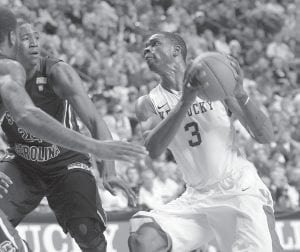 Kentucky’s Terrence Jones went to the basket against a pair of South Carolina defenders during the second half of their NCAA college basketball game in Lexington on Feb. 19. Jones had 19 points and a dozen rebounds in the 90-59 Kentucky win. (AP Photo/Ed Reinke)

Kentucky coach John Calipari doesn’t need to be reminded the 22nd-ranked Wildcats have been less than intimidating on the road this season.

Cailpari’s team was just 1-5 away from Rupp Arena in Southeastern Conference play heading into Wednesday’s game at Arkansas (16-10, 5-7). It’s a mark Calipari isn’t exactly pleased with, but one he’s not harping on it either.

“If your team is struggling with free throw shooting and you keep talking about free-throw shooting, you make it worse,” Calipari said. “We’ve played fairly well on the road and given ourselves a chance to win every single game.”

The Wildcats (19-7, 7-5) just haven’t done it. They’ve lost to good teams (Florida, Vanderbilt), bad ones (Mississippi) and ones in between (Georgia).

The margin of defeat in the five games is just 3.4 points. Calipari is well aware how close the Wildcats are from flipping their road mark from 1-5 to 5-1. Kentucky faced double-digit deficits against the Gators, Rebels and Bulldogs only to rally back and make it anybody’s game in the final minutes.

That resiliency hasn’t translated into victories, at least not yet.

“We are what our record says we are,” Calipari said. “We have a very young inexperienced team, but I still like my team though.”

Enough to start shortening practices to keep the Wildcats fresh.

Calipari says he typically limits practices to just over an hour once February rolls around. He hasn’t done that this season until very recently, citing his team’s youth as a major factor for not trimming its time on the practice floor.

The Wildcats looked better during home romps against Mississippi State and South Carolina last week. Forward Darius Miller threw in a career-high 22 points against the Gamecocks and Kentucky remained sharp in the second half.

Calipari was pleased but isn’t taking too much stock in his team’s effort. The Wildcats are supposed to win at Rupp, where the Wildcats unbeaten at home during his tenure.

He’d like to see them play with the same kind of tenacity and toughness on the road. They’re running out of chances. After Wednesday the only true road game left on the schedule is the season finale at Tennessee on March 6.

“ We’ve got two more road games,” Calipari said. “After that everything’s neutral and our fans are everywhere. So let’s use these two games to get better. Let’s figure out in a roughhouse game how we finish a game off.”

Arkansas, coached by former Kentucky star John Pelphrey, is no pushover at home. The Razorbacks are 14-3 at Bud Walton Arena, including victories over Tennessee and Alabama.

“They probably think they can beat us and I don’t think it’s going to lighten them up,” Calipari said. “It’s like, this is a chance to get them (Kentucky), and let’s take advantage of it.”

Yet Arkansas has its own issues. Pelphrey is 0-3 against his alma mater and the Razorbacks haven’t beaten Kentucky in their last 10 tries.

“A lot of peole want to beat Kentucky,” Pelphrey said. “Not everybody gets a chance to do that.”

To do it the Razorbacks will have to find a way to get guard Rotnei Clarke loose. The junior is shooting 44 percent from 3-point range and Kentucky has allowed a handful of players to post big numbers this season, most notably the 32-point by Vanderbilt’s John Jenkins in an 81-77 Commodores victory on Feb. 12.

“It’s a tough thing because he’s shooting deep 3s,” Calipari said of Clarke. “He could do to us what Jenkins did to us. He’s a quick trigger, he gets to the foul line; he’s really good.”