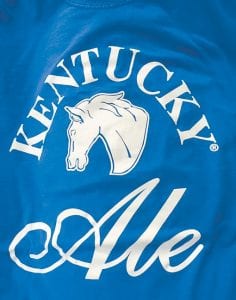 Other Commonwealth-based companies use the name “Kentucky” in registered trademarks. These photos show the front and back of a T-shirt given away last March at a University of Kentucky basketball game. The shirt advertises a beer brewed by Alltech, a Lexington company that is represented by the King & Schickli law firm — the same firm that wrote the initial letter October 12 demanding that Whitesburg’s Kentucky Mist Distillery abandon its effort to trademark its logo.

Kentucky Mist Moonshine filed suit this week in U.S. District Court against the University of Kentucky in a federal trademarkregistration case that has garnered national attention.

It asks that the court declare UK’s purported mark invalid and canceled in international trademark class 25 — the category that includes shirts and jackets — “or reform the registration to limit the scope of protection to uses of the word Kentucky, which denote a clear and unambiguous connection” to UK.

The lawsuit contends that Kentucky Mist should be allowed to register in that category and that there is no trademark dilution to UK caused by its registration. It asks the court to rule there is no infringement of the Kentucky mark by Kentucky Mist Moonshine’s use of the word Kentucky. 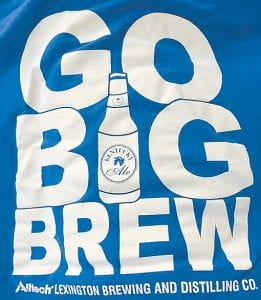 The lawsuit, filed in Pikeville but later reassigned to Lexington, also asks that UK pay the legal fees and costs for Kentucky Mist, a small Whitesburg company that opened its Main Street operation less than two months ago.

Among the lawsuit’s contentions, it states that “’Kentucky’ is a geographical location and the word has been commonly used since at least 1792.’”

The suit alleges that UK “was aware of the widespread use of the word Kentucky by businesses, organizations, government agencies and brands that are unaffiliated with and not sponsored by the University of Kentucky prior to the filing of its federal trademark application for the Kentucky mark.”

In an email message provided to the Herald-Leader on Oct. 29, UK spokesman Jay Blanton said the university has used the word Kentucky as a trademark to identify its athletic uniforms and various articles of clothing sold to fans since at least 1940.

Blanton’s letter said the university registered in 1997 with the U.S. Patent and Trademark offices for the word Kentucky for clothing, educational services and collegiate athletic services.

Blanton also wrote that other universities have taken that approach. He cited registered marks for Tennessee, North Carolina, Alabama, Missouri, Georgia and Texas. The licensing of those marks “generates a significant amount of revenue for the university, which is reinvested in its students through scholarships and other investments in the institution.”

UK claims it has an “incontestable registration for the mark Kentucky to identify clothing in class 25.”