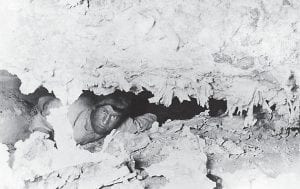 This photograph, taken a short time before Floyd Collins’s last venturesome journey through the mazes of Sand Cave in Cave City, Kentucky, on Feb. 9, 1925, shows Collins peering through a break in one of the interior partitions of the cavern. The original Associated Press caption said that for “10 days this gritty and daring mid westerner whose hard luck has stirred world wide interest and sympathy has been pinioned in darkness, wetness and horror under a ten top boulder in the cold entrails of the earth. Neither pains nor expense are being spared to take him living or to retrieve him dead. Rescuers are toiling like sons of Anak to reach him quickly.” (AP Photo)

The entrapment and rescue of 12 teenage Thai soccer players and their coach in a cave may seem like a novel or a suspense movie to much of the world, but to those familiar with Kentucky history, it is chillingly familiar.

For those who haven’t seen this — and there can’t be many who haven’t — the 12 boys — ages 11 to 16 — and their 25-year-old coach hiked to a popular cave complex in Thailand after soccer practice on June 23. It’s monsoon season in Thailand, and heavy downpours hit the area after they entered. The cave flooded and they were trapped inside for more than two weeks.

The world watched as videos and photos of the 13 are sent out to the world by Thai Navy SEALS, who located them on July 2. But despite the fact that divers had reached them, it was another six days before the rescue began because of the weather and the danger involved in taking young boys who had never dived out of a flooded cave. There was even talk of providing them food, water and medical care and leaving them in the cave until the flood waters receded, and that might have happened had oxygen levels in the cave not begun to drop dangerously low. Every member of the team had to don diving gear and be escorted out of the cavern by SEALS. The last of the 13 were brought out of the cave, alive, Tuesday, after 17 days underground. 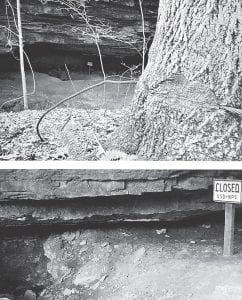 A rusty piece of cable that has become embedded in the bark of a yellow poplar tree (upper photo) opposite the entrance to Sand Cave (lower photo) in Cave City, Kentucky, is seen in this Jan. 26, 1965 photo. The photo was taken to commemorate the 40th anniversary of the operation to try to free Floyd Collins, a 35-year-old cave-explorer who was trapped in the cave. Collins was found dead on the 18th day of his entrapment. The cave now is part of Mammoth Cave National Park. (AP Photo/RH)

While they are safe, the situation is eerily like a caving accident that ended in tragedy in western Kentucky 88 years ago.

In that instance, readers around the world were glued to newspapers and radios as teams frantically tried to rescue a caver named Floyd Collins who was trapped in a cave in Edmonson County.

Collins entered Crystal Cave on January 30, 1925, and he was going it alone. The cave was a family-owned tourist attraction near Mammoth Cave, but it wasn’t very popular because it was so difficult to enter. Collins decided he could blast out a wider entrance to the cave and improve the cave’s tourism potential. Unfortunately, he decided to set off the blast while he was still inside the cave. 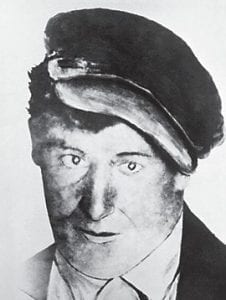 Floyd Collins as he appeared sometime prior to his death in a Kentucky cave in 1925. (AP)

In the process of widening the passage and belly crawling through a tiny tunnel, a 16-pound rock fell on Collins’s leg, trapping him. ough

In Thailand, the children were lost for 10 days before divers located them, but thanks to relatively dry conditions in Crystal Cave, Collins’s friends found him the next day and took him crackers and water. Unfortunately for him, there was only one entrance to the cave, and he was blocking it, preventing rescuers from getting behind him to free him. Rescuers attempted to dig a tunnel to him, but the cave passage collapsed, cutting him off from food and water.

As rescuers feverishly tunneled toward him, Collins became a radio and newspaper sensation. Louisville Courier-Journal reporter William Burke Miller even interviewed Collins while he lay trapped 150 feet from the surface, winning a Pulitzer Prize for his stories.

So far, all of the soccer players and the coach trapped in Thailand have survived their ordeal, thanks to divers who were able to shuttle food, water and oxygen tanks through the flooded passageways to them.

Floyd Collins was not so lucky. After 18 days trapped underground, Collins died of thirst, hunger and exposure.

His body was recovered two months later and buried, but when new owners bought the cave, they dug him up and put his corpse on display in a glass-topped coffin in Crystal Cave. After the body was stolen, found, and placed in another coffin chained up in the cave, the National Park Service eventually removed it. In 1989, Floyd Collins was finally reburied in the Mammoth Cave Baptist Church Cemetery.