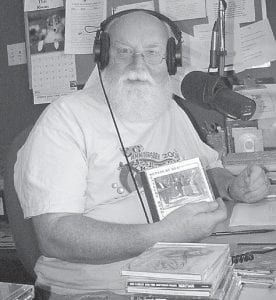 You don’t have to listen to ‘Red’ Roberts very long to surmise that he is a ‘ferriner’. Even a casual observer will know right away that he talks ‘proper’, as we mountain folks call his accent. We judge that he is from someplace north of the Ohio River or east of the Allegheny Mountains. He does attempt to sprinkle some mountain dialect into his speech in a good humored way, knowing that he can’t fool a true mountaineer. One has to be amused when he says ‘banjer’ to comment on his favorite instrument, the banjo. And he jokingly says, “it’s a fer piece” from Jackhorn where he and his wife Jane live to the head of Longfork, where Jane was born and raised. Only via the Internet could these two meet, fall in love and live happily ever after.

Jane Johnson Roberts recalls growing up on Longfork in Pike County. Her dad, Noble Johnson, loved to sing bluegrass music but he didn’t play any instrument. Jane says she didn’t know there was other music besides bluegrass until she left the two-room school she attended and was bused to the new school on main Longfork near Virgie.

Jane says, “All my friends were singing ‘American Pie’, but I preferred ‘Sweeter Than The Flowers’. The funny thing was I didn’t get a lot of peer pressure as kids would today. As a matter of fact, the Goins Brothers would come to our school to do a show and all the kids loved them.” Jane’s brother, Roy, was taught to play guitar at an early age by an uncle, Johnny Meade. Roy taught Jane to play when she was 16. They also learned to sing lead and harmony and enjoyed many years of picking and singing with their dad.

“We didn’t sing professionally; we mostly just sat on the porch and sang for our own amusement or gathered with other local musicians to pick in some neighbor’s yard under a tree. We did occasionally get to play at benefits, pie suppers and portapotty dedications,” said Jane, jokingly.

Meanwhile back in the concrete jungle of Philadelphia, Penn., a young Robert Harley Roberts with flaming red hair was growing up in a family who loved country and bluegrass music. ‘Red’ began playing music professionally at age 17 when he and his dad, Tex Roberts, joined Jimmy Moore and The Blue Mountain Boys at the Dog House Bar in New Brunswick, N.J. Red played banjo and sang with that band for several years. He attended the firstever bluegrass music festival in Fincastle, Va., in 1965.

His career was interrupted when he was drafted into the army and sent to Vietnam. He took his banjo along and found enough musicians among his buddies to put together a band. They performed anywhere they got the chance whether it was in the service clubs or in the barracks. Their music brightened the day for many a soldier who was homesick for a touch of home.

After Vietnam, Red played for a few years with the folk band The Odes, and then joined the Sunnyside Bluegrass Gospel Band as a founding member in 1975 and was the banjo player and tenor singer in that band for 25 years.

There are many storybook tales of the boy who grew up and married the girl next door and lived happily ever after. In the real world that rarely happens. Sometimes fate intervenes late in life. So it was with Red and Jane. Coincidentally they both logged on to the bluegrassrules.com website at the same time. They began chatting and learned that they had a lot in common besides their love of bluegrass music. They became good friends and after two years of just chatting, they decided they should meet personally. They both attended a bluegrass music festival at Graves Mountain in Syria, Va. After a series of events in the courtship, Jane decided to move to Pennsylvania and lived there five years. They got married there but Jane was homesick. Jane has two grown sons and ‘Red’ has four grown daughters. Red had worked in the aerospace defense industry for most of his life and when it was time to retire, they decided to move to Jackhorn.

Red, who is acknowledged by his peers as a master banjo player, also plays the guitar, mandolin, upright bass, dobro and autoharp. He taught Jane to play the mandolin and in 2002 they formed The Kentucky Red Band. This band played in Pennsylvania, New Jersey, Delaware and Maryland for a few years before Red and Jane moved to Kentucky. They decided to keep the band and Jane’s brother, Roy, and 17-year-old nephew, Nickey Joe, complete the Kentucky Red Band. Their band plays several times each year at the Hemphill Community Center where Jane is on the board of directors and Red is on the board of advisors. They have also played at the Lays Hardware Store in Coeburn, Va.; Country Cabin in Norton, Va.; the Tacoma, Va., Community Center; Front Porch Pickin’ on Big ‘D’s TV show broadcast from Hindman; and The Cumberland Mountain Bluegrass Music Festival in Jenkins. They frequently participate in a Tuesday night jam session in Hindman.

Before moving to Kentucky the band recorded one CD entitled ‘Kentucky Red, Kentucky Road’ which featured all original music written jointly by Jane and Red. They have plans to produce two more CD’s. One will be all gospel songs and the other will be all bluegrass, much of which will be original songs. Roy and Nickey will join them on the CD’s.

Bluegrass music now dominates their lives. Recently they have become volunteer D.J.’s on WMMT radio in Whitesburg. Both have completed the mandatory training program where they learned to operate the broadcast equipment and also learned the FCC rules. Though they don’t have their own program yet they serve as substitutes regularly. Their monikers ‘Ol’ Red and Kentucky Girl’ are a carryover from the days when they were communicating via the Internet. WMMT broadcasts on several frequencies to Kentucky, Virginia, West Virginia, and parts of Tennessee and North Carolina but not Pennsylvania. Red’s daughter, Heather, who lives in Pennsylvania, is a bluegrass music fan and listens to her dad’s broadcast via the world wide web, www.appalshop.org.

Bluegrass music fans can see ‘The Kentucky Red Band’ at the third annual Cumberland Mountain Bluegrass Music Festival in Jenkins, July 11 and 12, at the Little Shepherd Amphitheatre. They are scheduled to perform Saturday at 7 p.m.. The event will feature 16 of the region’s finest bands. Five bands will play on Friday from 5 to 10 p.m. and 11 bands will play Saturday from noon to 10 p.m. For additional information, please call 832- 4122 or 832-1453.