Kentucky, UCLA to meet in Chicago 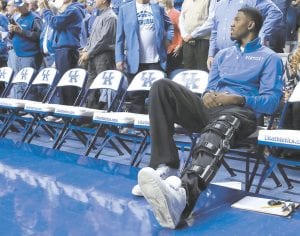 Injured Kentucky player Alex Poythress sat on the sideline during the second half of Kentucky’s 84-70 win over North Carolina. Next up for UK is a game in Chicago Saturday with UCLA. (AP Photo/James Crisp)

The only school with more national championships than top-ranked Kentucky’s eight is UCLA with 11.

On Saturday, the Wildcats and Bruins play for the first time in eight years in the second half of an impressive doubleheader in Chicago.

Kentucky (11-0) is the unanimous No. 1 team in the AP poll. The Wildcats are coming off an 84-70 win over No. 24 North Carolina, which is tied with Indiana for the third-most national championships at five each.

The Tar Heels play No. 12 Ohio State in the first game Saturday in Chicago, one of only two games all week matching Top 25 teams.

Every loss this season by UCLA (8-3) is against ranked teams — Oklahoma, North Carolina and Gonzaga on Saturday.

This will be the third time in their four meetings since 2006 that Ohio State and North Carolina are both ranked.

The last was five years ago at Madison Square Garden, when the Tar Heels won like they have in all three previous meetings.

ALASKA TO VEGAS — A DECADE LATER: Oklahoma and Washington last played 10 years ago in the semifinals of the Great Alaska Shootout.

This time, the No. 15 Sooners and No. 16 Huskies are in the only other game this week with ranked teams playing each other.

They start a doubleheader in Las Vegas on Saturday, with the nightcap being No. 14 Utah against UNLV.

A FEW TITLES, TOO: No. 2 Duke won its first game in 12 days after exams Monday, beating Elon as Jahlil Okafor had a seasonhigh 25 points and set a Blue Devils freshman record with 20 rebounds.

Next for the Blue Devils (9-0) is Thursday night against defending national champion UConn (4-3) at East Rutherford, New Jersey. Then comes another 10-day gap between games for the Christmas break.

Duke and UConn each have four national titles. The Huskies beat Duke in the 1999 national championship game, and won over the Blue Devils in a national semifinal game in 2004 before beating Georgia Tech for another title.

Before a win Sunday over Coppin State, UConn had lost three straight games to fall out of the Top 25. The Huskies’ losses were to Big 12 schools West Virginia and Texas before falling to Ivy League school Yale.

CROSSROADS CLASSIC: The Indiana Hoosiers were No. 1 and undefeated the last time they went to Indianapolis to take on Butler two years ago.

When they play Saturday at the home of the Indiana Pacers, both teams go into the game 8-2. The Bulldogs are No. 23 in the latest poll and Indiana is unranked.

Walk-on guard Alex Barlow hit a short jumper with 2.4 seconds left in overtime two years ago to give the Bulldogs an 88-86 overtime victory.