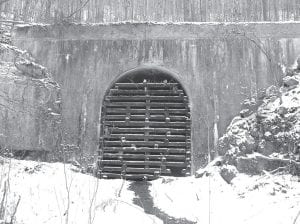 This photo of the Jenkins-Pound railroad tunnel was taken by Mike Branham in 2012.

The mountains around Pound are literally filled with trails of untapped potential and hiking enthusiast Debbi Hale is looking for like-minded people ready to help make them a destination point.

High on Hale’s list is finishing a three-mile stretch along an abandoned railroad bed that would connect to the Red Fox Trail, the only historic trail on U.S. Forest Service property in the Clinch District. The Red Fox Trail, developed by the Historical Society of The Pound some 30 years ago, is about a mile long and only a five-minute walk down hill from the trailhead at the top of Jenkins Mountain.

Already involved in local and regional trail efforts, Hale spoke to a small gathering recently in Pound to muster volunteer support. She suggested leading an easy, short hike so people could see just how beautiful — and just how close to completion — the old railroad trail is.

If people could walk just the first half-mile, observed historical society leader Linda Hubbard, “you can’t help but want to do something.”

Trail supporters also learned of efforts already underway across the mountain in Kentucky to reopen the old Chesapeake and Ohio railroad tunnel through the mountain, connecting the two commonwealths.

That caught the attention of Wise County Tourism Director Mike Wampler, who suggested the group needed to establish some priorities among the many potential options. The old railroad trail could be the top short-term project, Wampler said, while reopening the tunnel could be the lead long-range project.

“The thing that sells the best is the thing that other people don’t have a lot of,” Wampler told the group. An old railroad tunnel through a mountain connecting two states would be one of those things, he said.

Jenkins City Administrator Todd DePriest and Don Amburgey of the Little Shepherd of Kingdom Come Outdoor Drama briefed the group on that endeavor in late March. While some doubt the feasibility of reopening the tunnel, DePriest said a mining engineer reports it can be done, and done safely. Nearly $89,000 in grant funding is already available to build the trail, DePriest noted.

Amburgey envisions a tram that would take people between Pound and Jenkins, adding that there is incredible interest in the tunnel in Kentucky.

“It has some kind of fascination that you would not believe,” Amburgey said. “If this were done, Jenkins and Pound would have something no one else would have.”

The advantage of being a state line town is having people from two states working together on a project, Hubbard added.

The undeveloped stretch of trail near Pound runs through private property, Hale said, and would provide access to the area between North Fork Lake and the Pine Mountain Trail, which is part of the Great Eastern Trail connecting the Gulf Coast to Canada. Hale said she has spoken to all landowners along the route and “they are ready to sign” easements for trail development.

“I think this would be an absolute jewel for the Pound community,” Hale said, noting that the trail already exists and “just needs a little bit of upgrade.” It would come out near the mural on U.S. 23 that welcomes visitors to Pound.

The trail would go by the burial place of historic figure Devil John Wright and connect to the Red Fox Trail, which passes by Killing Rock, the site of the infamous ambush of 1892.

This trail is a safe and great place to walk, take a hike, ride a bike or horse, cross country ski in winter or just sit and enjoy nature, Hale said.

If they could get this designated as a public trail, Hale noted, the Forest Service has said it would stock Lake Lockwood for fishing. The hunt club in the area reports having already seen elk out that way. It would be a great place for a picnic area, too.

A retired Pound High School teacher, Hale hopes to inspire interest among teachers. “If students could see this and start enjoying it, I think it would really have an impact,” she said.

“I see so much potential for that little railroad bed,” she added.

Hale’s already connected to local and regional tourism and trails development activity but wants to mount an effort now focused on Pound.

After having it in her mind for quite awhile, she told those gathered at the meeting back on March 27, “Finally, I just thought, ‘I need to just go ahead and get with it.’ I’m asking for your help . . . It would go a long way for this community.”

Reports that trail endeavors would exclude off-highway vehicles are not accurate, she said, adding, “There’s no way I would leave those out.”

But all trail work requires a core group of people to push it, Hale noted.

“That’s where we’re lacking,” Hubbard observed. “A group of people who have the interest to work together to make this happen.”

That night, only a handful attended the meeting and just a few were actually from Pound.

The group agreed there needs to be a large, determined grassroots effort.