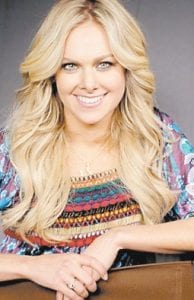 For the most part, the traffic has headed north. Reba McEntire and Dolly Parton are among the country stars who have made the journey from Nashville to Broadway.

Laura Bell Bundy has taken the road less traveled, with a successful stage career in her rearview mirror and her sights set on the country-music scene. Bundy’s debut country album, “Achin’ and Shakin’,” dropped this week.

“It seems an unusual route to go for a person who knows me having had success in the Broadway field,” said Bundy. She was nominated for a Tony for the lead role in the 2007 musical-stage adaptation of the Reese Witherspoon big-screen hit “Legally Blonde.”

“But I’m from Lexington, Kentucky,” Bundy continued. “I listened to country music my whole life. I started writing music when I was a teenager. It all came out country.”

That said, Bundy’s Broadway roots seem to show in the music video for the current single “Giddy On Up,” with its lavish production values and let’s-puton a-show sensibility. Bundy was quick to correct, saying the inspiration was actually more Music Row than Great White Way.

“What I loved about country music when I was a kid was the Grand Ole Opry, was ‘Hee Haw,’ was 360 degrees of entertainment,” explained Bundy, who is performing on Sunday’s Academy of Country Music Awards in Las Vegas. “Make ‘em laugh, make ‘em cry, make ‘em want to get up and make ‘em dance twostep or line dance or whatever. … I feel like that has been missing recently.”

Theater fans missing Bundy, 29, will have to wait a while before she’d consider returning to New York, as she wants to focus on music. She does, however, have a property she’s hoping to bring to the stage — saying it would be for herself or another actress. And, she said, there’s “some stuff being talked about in regards to ‘Glee,’” but nothing’s firm.

“Really, it’s like having two different baskets with eggs in it,” Bundy said of her Broadway- Nashville coexistence. “You know, I had the music baskets and the writing basket. And I had the acting. And those eggs just hatched first and the others were slow to incubate. So, it just seems that way to other people because nobody cared about my country music until I did a Broadway show.”

On the Net: www.laurabellbundy. com/