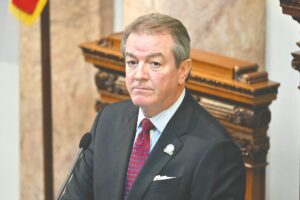 Kentucky Speaker of The House David Osborne addresses the members during the opening day of the Kentucky State Legislature in Frankfort Tuesday. (AP Photo)

Kentucky’s legislature convened Tuesday for the start of a 60-day session, with Republican lawmakers firmly in control of the agenda even as COVID-19 remained a potential disruption, with one senator announcing he tested positive for the virus before his colleagues assembled.

Democratic Sen. Reggie Thomas said he self-quarantined after testing positive but was not experiencing any virus-related symptoms. Thomas got the test results before lawmakers convened.

“As I recuperate from this minor setback, I look forward to returning and getting back to work for the people of Kentucky,” the Lexington lawmaker said in a statement.

A dramatic coronavirus surge in Kentucky, fueled by the omicron variant, served as a grim backdrop as lawmakers gaveled into session. And it offered a stark reminder of the partisan divide regarding the global pandemic. Most Republicans in the GOP-dominated legislature were unmasked while the House and Senate were in session, while most Democratic members wore masks.

The session will continue into mid-April, but lawmakers had an immediate task ahead of them — redrawing congressional and legislative maps in response to shifting population trends across Kentucky. Redistricting bills were introduced and placed on a fast track, with committee hearings beginning Wednesday (today). GOP leaders hope to wrap up the once-a-decade chore in the first week of an election-year session that will stretch into mid-April.

With super majorities in both chambers, Republican legislators will set the agenda in crafting a new state budget and determining the outcome of legislation. They wield enough clout to override vetoes by Democratic Gov. Andy Beshear if they stay unified.

Beshear will present his priorities for the session in his State of the Commonwealth speech, set for Wednesday evening. The governor tweeted Tuesday that he will discuss ways to build on last year’s economic momentum, when the state had record levels of business investments and job creation.

Along with the legislature’s usual opening-day pomp, the mood turned somber when talk turned to the tornadoes that devastated parts of western Kentucky last month, killing 77 people.

“I just wanted to say ‘thank you’ for everyone that reached out and expressed their support and sent help and they sent volunteers because it certainly has been overwhelming for us,” said Sen. Mike Wilson, who represents Bowling Green, among the communities hit hard by the storms.

The governor tweeted that his Wednesday night speech also will focus on how to help families and communities recover from the tornadoes. A New Year’s Day tornado outbreak caused new damage in several Kentucky counties, including some hit hard by the December storms. Lawmakers have had discussions with the governor about ways to speed the recovery, Senate President Robert Stivers said Tuesday.

Lawmakers’ foremost task during the session will be writing a new budget.

Top lawmakers have signaled they want to return to passing a two-year budget after the uncertainties of the COVID-19 pandemic led to one-year budgets the past two years. Unlike the lean years of the past, lawmakers have the advantage of deciding what to do with unprecedented amounts of surplus state money as well as another huge round of federal pandemic aid.

Other issues expected to be at the forefront include education, taxes, workforce development, abortion and sports wagering. Stivers said he will push for legislation to help overcome shortages in health-care professions, especially nursing, that worsened during the coronavirus pandemic.

Republicans showed no appetite to restore any of the Democratic governor’s emergency powers to impose restrictions to combat the spread of COVID-19. When asked if he’d consider giving Beshear his emergency powers back on mandating masks in schools, Stivers replied: “Nope.”