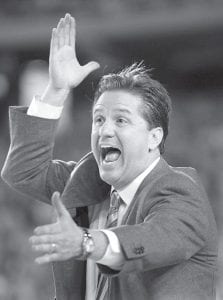 This is a March 26 photo showing Memphis coach John Calipari yelling at officials during the second half of a men’s NCAA college basketball tournament regional semifinal against Missouri in Glendale, Ariz. (AP Photo)

On paper, John Calipari ranks behind only Roy Williams for the wins he’s produced over his 17 seasons even if he doesn’t have any national titles.

What he also has, deserved or not, is a reputation as a basketball player factory who somehow gets the best players with little attention paid to academics.

Calipari flew Tuesday night to Lexington after nine seasons as the winningest coach in Memphis history to be introduced today (Wednesday) as Kentucky’s new leader — and the highest paid coach in college basketball.

His game is all about emotion and passion.

“I coach with it,” Calipari said during the NCAA tournament. “That’s why I’ve aged very fast. But I coach with that emotion and that intensity, so I want it, but it’s also got to be kept in check including with me.”

Calipari’s accomplishments as a coach are undeniable. He is 252- 69 at Memphis and 445-140 in 17 seasons overall with 10 NCAA tournament berths combined at UMass and Memphis.

Among Division I coaches, only Duke’s Mike Krzyzewski (10) and Williams (9) have more 30-win seasons than Calipari with six. Only Williams with a record of 472-116 has more wins in his first 17 seasons as head coach — more than former Kentucky coach Rick Pitino, Tubby Smith in four stops and Denny Crum.

Critics see Calipari as a coach willing to do anything to win and point to a record that includes players arrested in Memphis, too much recruiting success with NBA talent, questionable ties and a lack of academic success. He wasn’t implicated when Massachusetts vacated its 1996 Final Four appearance after star Marcus Camby admitted to accepting gifts from a sports agent.

Calipari is guilty of going the extra step to sign players at Memphis, and he is a players’ coach.

He gave a scholarship to close friend Arthur Barclay and hired Milt Wagner as director of basketball operations in May 2000 to get Dejuan Wagner to commit. Wagner led the Tigers to the 2002 NIT championship as a freshman, then became Calipari’s first NBA lottery pick from Memphis. On his current roster, Calipari has C.J. Henry —older brother of incoming recruit Xavier Henry.

Before Calipari left Memphis, Henry said in Coral Gables, Fla., that he would reconsider his decision.

Calipari doesn’t shy away from recruiting players using college as a short stop on their way to the NBA.

Wagner was followed by Shawne Williams and Derrick Rose, all lottery picks and all one and done. Darius Washington left after two years. That doesn’t include recruits that went straight to the NBA such as Amare Stoudemire, Qyntel Woods and Kendrick Perkins.

His recruiting pipeline? Allegedly William Wesley, someone Calipari calls a friend of 20 years that maybe two of his Tigers know.

“This stuff on recruiting is about relationships,” Calipari said last year before the national championship game. “It’s what it is. Whether it’s with AAU coaches that you coached one of their kids and you did well by them, they’ll help you get another kid. That’s what recruiting is. And it’s all about having relationships where people will talk good about your program and you. I have a lot of relationships.”

There have been plenty of arrests, including a couple Tigers down on Beale Street in a nightclub scuffle in 2007. Calipari responded by banning them from clubs and with a temporary curfew, and charges later were dismissed.

Calipari threw Jeremy Hunt off the team for slapping and kicking a former girlfriend but let him return. Hunt graduated in 2006. Calipari left his backup point guard Andre Allen home from the Final Four for a violation. His philosophy? Second chances are possible, and how would you want your son treated?

“They’re coming all the time from families and cultures where they’re on third base. They’re starting in the dugout, and they’re going to make some mistakes at times,” Calipari said last year.

And Calipari insists the academics have come along.

Memphis had a zero graduation rate when Calipari took over in 2000. Now the Tigers boast in their game notes how he has graduated 15 of his last 18 seniors since 2002-03, 17 of his last 23 with Robert Dozier, Antonio Anderson, Chance McGrady and Shawn Taggart set to earn degrees in May.

Calipari gives credit to the president and university for providing support: “In the non-BCS, it takes a village. It’s not just the basketball coach.”