Sunday’s final race at Homestead Miami may have not had the down to the last lap finish between Brad Keselowski and Jimmie Johnson that everyone wanted, but for 214 laps it kept us on the edge of our seats.

Johnson had the better car between the two drivers and thanks to some strategy by his crew chief Chad Knaus was going to be able to finish the race on just one stop while Keselowski was going to have to make two stops.

It was on that pit stop on lap 214 that Johnson took his first real hit of the day as he was called back down pit road for a loose lug nut on his left rear tire. The pit road mistake was just a prelude of what was to come for the fivetime champion. On lap 226 he was forced to take his Chevrolet back to the garage area to repair a problem with the driveline.

Keselowski’s crew chief Paul Wolfe then radioed his driver that Johnson had just pulled into the garage area and all that was left for him to do was to look for the checkered flag. He kept his Miller Lite Dodge out of trouble and was able to cross the finish line one lap down in 15th. 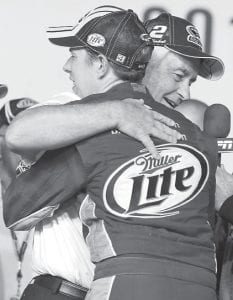 Besides being the first ever title for Keselowski and Wolfe, it was also the first Sprint Cup championship for their owner Roger Penske who is in his 23rd year of fielding a full time team in the series. It was the second major title for the trio as they as they also won the Nationwide Series title in 2010.

In somewhat of an ironic twist to the title for Penske and Keselowski is that they are also giving their manufacturer a going away present. Penske’s two-team operation had the only Dodges in the series when the manufacturer announced that it would be getting out of the sport at the end of the season.

Dodge had been out of the sport for years before they came back in 2001 as both the manufacturer and sponsor for Ray Evernham Motorsports. Dodge was able to get to victory in each of the seasons following their return but Keselowski’s title was the first for the manufacturer since Richard Petty won his sixth title in a Dodge in 1975. Dodge will now leave the sport with a total of five Sprint Cup championships.

Johnson’s 36th place finish actually dropped him down to the third in the final standings while Michael Waltrip Racing’s Clint Bowyer’s second place finish on Sunday to Jeff Gordon was good enough for him to finish second for the season. The second place finish for Bowyer capped off a career-best season as he posted three wins, 10 top-five and 23 top- 10 finishes, all career highs.

It was Gordon’s second win of the season and the 87th of his career. He is in third place on the all-time win list behind Petty and David Pearson. The win was also Gordon’s fourth Chase race win, but his first win in the championship round since Martinsville in 2007.

PIT NOTES: Penske will be switching to Ford next season and will no longer have his own engine shop. He will get his engines from Yates-Roush Engines and even though the power and reliability in those engines are legendary, the operation will miss having total control of what is coming out of their own engine shop that this year proved it had the ability to produce as much horsepower as anyone.

Gordon and Hendrick had never won a race at Homestead and with the win, Kentucky is now the only track on the Cup schedule where the two have not visited victory lane.

Keselowski becomes only the third driver in the modern-era of the sport that began in 1972 to win a title in his third full season; he accomplished the championship in 125 career starts. Next season Penske and Keselowski will welcome driver Joey Logano to their team. He will take over the driving duties for Penske’s No. 22 Ford.