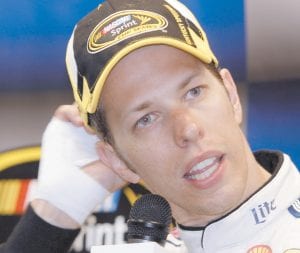 NASCAR driver Brad Keselowski sported a bandaged right hand after cutting himself with a champagne bottle while celebrating his victory at Kentucky Speedway over the weekend. (AP photo)

Brad Keselowski will have to fine-tune his victory celebrations after a shattered champagne bottle left him with a bloodied and bandaged right hand.

The upside is he might get more chances to polish his post-race revelry as he pursues his second Sprint Cup Series championship in three years.

Already locked into the Chase with a Las Vegas victory and a solid string of top-fives, Keselowski delivered his most dominant run over the weekend at Kentucky Speedway. He started from the pole and led 199 of 267 laps en route to his second win this season.

The Penske Racing driver heads to Daytona International Speedway fourth in points and showing the form that carried him to the 2012 championship. Missing last year’s Chase also seems to have made Keselowski wiser — this past Saturday night notwithstanding.

“I want to win another championship,” Keselowski said after a roundabout journey between Victory Lane and the infield care center to receive four stitches after striking the bottle on the podium.

“I don’t want to be a guy that contends for a championship every three or four years. I want to do it each and every year and I know that opportunity is here, it’s present and I want to make the most of it.”

The exuberant 30- year- old joked that he was going through something of a midlife crisis, perhaps his way of stressing that he has to maximize his window of opportunity to win titles. That urgency worked for him two years ago, when he won five times with 23 top-10s and 13 top-fives to win the title.

Keselowski has two fewer wins than at the same point in 2012 but is showing the same consistency. His second Kentucky victory marked his ninth top-10 along with a series- best second triumph at 1-1/2 miles, the distance of many Chase tracks.

Those intermediatelength tracks don’t return to the schedule until August at Atlanta, but Keselowski noted the importance of finding the formula now.

“When you can run well at this point in time, it bodes well for the final half of the season,” he said. “Certainly, we’re not content. … The reality is that Hendrick cars had won three or four of the last five and they’re going to continue to be the cars to beat. So we have to keep pushing as well.”

Keselowski returns to Daytona looking to build on February’s third-place run at the 500 and extend a recent run of top-10s on the 2.5-mile track. He enters with momentum following a commanding Kentucky performance in which he and teammate Joey Logano began on the front row and combined to lead the first 217 laps. The Michigan native later rallied from sixth on a restart to pass Kyle Busch on Lap 248 and pull away.

Keselowski said the effort was reminiscent of his title year, when everything seemed to come together either by will or circumstance.

“Performances like (Saturday), sometimes they’re few and far between,” crew chief Paul Wolfe said. “We’ll continue to work hard to put together cars like this every weekend, and this is the type of performance we’re going to need to be able to compete for another championship.”