KET is airing classic films by Appalshop for 11 weeks 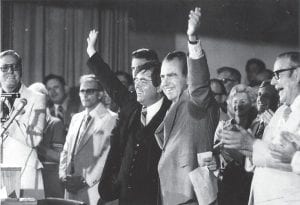 Richard Nixon chose Leslie County for his first public appearance since resigning the Presidency in 1974. Footage of his visit is shown in “The Big Lever,” an Appalshop film which airs on KET Thursday night at 7.

“Appalshop@40: Classics from the Collection” is a new 11-part television series on KET showcasing some of the best film work produced since Whitesburg-based Appalshop began as a media training program in 1969. The series will run on Thursdays at 7 p.m., Saturdays at 10 a.m., and Sundays at 11 a.m. on the Kentucky Channel, and Fridays at 2 a.m. on KET.

The series kicked off last week with “Sunny Side of Life”, a look at the original Carter Family and their ongoing musical tradition in southwest Virginia.

“ The Big Lever” begins airing on Thursday, Jan. 14. In 1978 Richard Nixon chose the small mountain jurisdiction of Leslie County, Ky., for his first public appearance since resigning the Presidency. Footage of his visit introduces this incisive and sometimes hilarious look at the engines that drive American politics. The film explores the machinations of party politics in rural and staunchly Republican Leslie County: hollow to hollow votehunting; family squabbles over candidates; patronage promises; courthouse steps speechmaking; and the up-and-down career of the incumbent County Judge/ Executive who sought re-election while under indictment for vote fraud conspiracy.

“The Big Lever” includes an interview with Letcher County lawyer and author Harry Caudill, who traces Leslie County’s Republican leanings back to the Civil War era, when there were few slaveowners in the county, and the party was the party of Lincoln.

Featuring a variety of characters, topics, film styles, and production dates, “Appalshop@40” reflects both the place-specific nature and universality of Appalshop media work. The films in the series include people, events and stories from eastern Kentucky, southwest Virginia and West Virginia. Some of Appalshop’s earliest productions are featured (“Coal Miner: Frank Jackson” and “In Ya Blood”) as well as a series on the history of the region (“Strangers and Kin”, “Long Journey Home” and “Beyond Measure”) that was made in the 1980s/early 1990s. A number of the individual films have been preserved and remastered as part of the work of the Appalshop Archive.

Visit the Appalshop website (www.appalshop.org/tvseries for a complete listing and schedule.