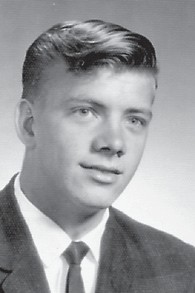 MARLOWE BOY — Doug Profitt is the son of Martin and Virginia Profitt. He is a grandfather now, living in Ashland.

Hello everyone. I hope you are okay and having a great day. It’s been a good week except for the funerals. They are always sad, especially if they are old friends.

One of our Marlowe boys, Bill King, died. I went to his funeral. He had been a friend of ours about all of his life. It was good seeing Willis King there. He’s the son of Mandy King and we hadn’t seen him in a long time.

I always see the Pennington girls, Dorthy, Linda, and Pearl, there. Linda was there, but Dorthy and her daughter, Jeanette Yonts, had a car accident and she was too sore to get out. Thankfully, all they got were lots of bruises. I think Jeanette may have some ribs broken, but it was a bad wreck.

I was so sorry to hear an old friend from Marlowe, Nellie Banks of Bloomington, Ind., had died. She lived in Marlowe when she was young and married Bro. Maynard Banks. We still talked on the phone.

She was 94 years old. They were well loved by everyone who knew them. He was a Pentecostal preacher and she was a great preacher’s wife.

She has a sister, Betty Sue Anderson of Jenkins. I’ve tried to call her, but her line is always busy. She’s a good talker and loves to talk to her friends.

Our sympathy sure goes out to all the families, and to the King family. I think most of them still live around here.

I also went to the funeral of Eunice Hall. She died such a short time after her son, Guy Stewart, died. They were the mother and brother of Bennett Adams of Craft’s Colly.

Now for some more cheerful news: Kevin Day had a birthday May 17. We went to the Mexican place for dinner and I told one of the boys it was his birthday, and guess what?

His wife Wendy took a picture of him, and probably his son, Larry, will put it on Facebook, and maybe you all will get to see it. It was a fun evening.

We also had a nice Mother’s Day dinner at Parkway Restaurant, Sandra Cook and daughter Angie and Pam and Ellie; Heddy Adams, Pam Anderson and her grandchildren; Bonnie Roark and daughter Christy; Kim Sergent and her mother; and of course cousin Billy Hatton and myself. Four generations of my family were there: me, Billy, Angie and Ellie and Sam Mullins.

It sure was nice. Thank you, girls! They do that every year. We missed those who are no longer with us.

My sister Louise Shepherd and I had lunch Sunday at Arby’s. We enjoyed it. It was good!

I had a good little visit with Charles Hatton and his son Denny Ray and daughter Delana. I was disappointed that their two little dogs didn’t pay any attention to me. They were glad to have their own people there.

We had a real good church service last Sunday. Bro. Jamie Niece preached real good. He always does. We are so proud of all our young preachers, all home boys who seem like family.

We have so many people who are too sick to come to church, and some who just don’t come, and we miss them and want them to come back. We have good crowds, but we always want more.

God bless all of you, and try to be in church somewhere this week if you are able.