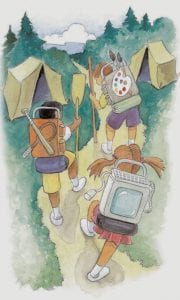 Lots of kids go to summer camp, but not many get to create their own.

Starting this summer, about 15 kids will get to put in their two cents on a new summer camp set to open in 2008.

The “Board of Campers” is the idea of Marc Honigfeld, whose family owns Trail’s End sleepaway camp in Pennsylvania.

“We want to hear from kids,” Honigfeld said. “Instead of parents making choices for kids, having kids be a part of it is the idea.”

The group met for the first time in June at Dylan’s Candy Bar, a candy shop in New York, to discuss ideas. Over the next year, Honigfeld will poll his underage focus group on what’s most important to them.

The new camp, dubbed Chestnut Lake Camp, will be set on 150 acres in northeastern Pennsylvania recently bought and renovated by Honigfeld, his wife and his in-laws, who have owned Trail’s End since 1986. The camp, which will start out with kids aged 8 to 12, will run in two three-week sessions costing $4,400 each, Honigfeld said.

Before the first meeting, Long Island, N.Y., fourth-grader and board member Evan Biancardi had an idea for a camp charity fund-raiser.

“We could have a carnival, and the kids could make their own stands, and other kids could come to it,” said the 9- year-old baseball fan.

“You know the movie ‘High School Musical?’ Maybe they could take the movie and do it,” Dylan said.

The kids on the Board of Campers will be brainstorming ideas for how to make topics like geology and the environment “cool and fun,” Honigfeld said.

But some suggestions, like TVs in the tents, are out. “That’s not summer camp,” he said. – Elizabeth Lazarowitz, New York Daily News