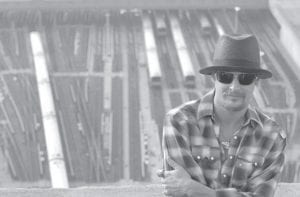 Despite selling millions of records and notching several hits, Kid Rock is better known these days for his tabloid antics than his music.

As anyone who keeps up with pop culture knows, he married Pamela Anderson last year, a union that ended quickly and disastrously. He recently accused of her of being a manipulator, and Anderson has already remarried. In addition, Kid Rock recently punched Anderson’s ex, Tommy Lee, at the MTV Music Video Awards.

Now, the 36-year-old is trying to put the focus back on his music with the release of his sixth studio album, “Rock N Roll Jesus.” Rock sat down with The Associated Press to talk about why this album is a make-it-orbreak it disc for him, living the celebrity life and getting over Anderson.

AP: In the past, your music has not been genre specific. Does this album follow that same formula?

Rock: In my previous albums I have always touched on different genres whether it has been hip-hop, country and the rock element. On this one I just feel more comfortable in my own skin than I have ever felt as an artist, songwriter, as a father, just as a human being. This is the record that everything has come together on. The songwriting has really stepped up, the playing, the singing and all those genres that I’ve stepped in and been like a creative chameleon. It really kind of shines in this record in a great way. I think I really nailed it on this record.

AP: Are you afraid that your tabloid headlines will overshadow your music?

Rock: There is no question. I think it has in the last few years, definitely. The personal antics have overshadowed the music. I never wanted that but I knew what I was getting into when I got into everything I got into. The stove was hot and I wanted to touch it. I touched it and it burnt the hell out of me. I’m thankful that I proved myself in music which is my first love, my first passion before I got involved in this media, whatever you want to call it. I am hoping to bring it back to the music now.

AP: Are you worried that the damage is already done and no matter how hard you try, people who once were fans are not going to take you seriously?

Rock: I’ve always been honest enough with myself and my fans. They can see through what is real and what’s not. People know that tabloids are just a form of entertainment. It’s not truth.

AP: When you make headlines for doing bad things, such as slapping Tommy Lee, are you worried that your son is going to imitate you?

Rock: No. I’m not worried about headlines affecting my family, especially my son. He knows who I am. Whatever these things he is reading, he has a different perspective than the rest of the world just as a lot of my friends do. You can only go so far with a headline and there are two sides to every story, so I am not worried about it.

Rock: No. I fell in love. It was a great thing to be in love. I was a complete idiot in love. I always say getting married was a ball. I had a blast getting married. Loved it so much I got married six or seven times or whatever it was. Being married sucked. Maybe for some people it is not meant to be.

AP: Will you allow a girl to steal your heart again?

AP: How much of the album was inspired by your failed relationship?

Rock: The best formula for revenge is success. It kind of made sense to me. As much as you don’t want to say you are a vengeful person, when someone drags your name through the mud and plays press games and puts things out there like that, you are kind of like, alright. US Weekly will be gone next week, the songs I am writing won’t.

AP: Eminem wrote about his ex Kim as well. Is there something in the water in Detroit?

Rock: It is a good point. I was trying to explain to someone. I have no problem with this, but I just wasn’t raised a granola eating, peace love hippie type person. I’m from Michigan and was raised in and around Detroit where it is kind of you get respect and you give respect. That is how I feel today. I don’t want to be some tough guy like, look who I punched out. I don’t want that reputation, but I do believe in standing up for what you believe in and your family and your friends. I’m no saint but I do believe in what is right.

AP: Do you have any regrets about punching Tommy Lee?

AP: What constitutes success for you on this album?

Rock: I wouldn’t be honest with myself if I said that it wouldn’t hurt if this album didn’t sell. It would. It would be painful because I think it is my best album to date. I think it is a great body of work, my best body of work that I have ever done. Of course I want people to show up to the concerts and I am sure for that to decline would be a difficult thing. I am scared of being broke and famous. I think that would be the biggest curse. … that really scares the hell out of me. That helps me to make myself better and always try to improve as a songwriter and singer so I don’t ever have to face that.