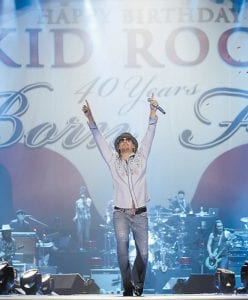 Kid Rock walked out on the stage to start his concert at Ford Field in Detroit. (AP Photo)

Kid Rock is big on a few things: music, a good time and his hometown of Detroit. So, when it came time to celebrate his 40th birthday, he rolled them into one with a special concert at Ford Field before tens of thousands of his Motown pals and an array of VIPs.

The man born Robert Ritchie on Jan. 17, 1971 (his actual birthday was Monday) strutted on stage at the downtown NFL stadium Saturday night to a most fitting tune: “Birthday” by the Beatles. And the rest of the show, dubbed “Guess I’m Frickin’ 40,” was eclectic and electric: Rock played some of his biggest career hits while sharing the stage with the likes of Sheryl Crow, Martina McBride, Anita Baker, Peter Wolf of the J. Geils Band, Uncle Kracker and the Rev. Run from Run-DMC.

The latter joined Rock, who will perform in Louisville on Feb. 11 and in Huntingon, W.Va., on Feb. 23, for a rousing version of “Walk This Way,” with the birthday boy singing the Steven Tyler part from the rock-rap crossover smash while making a nod to his appearance more than a decade ago with Run-DMC and Aerosmith at the MTV Video Music Awards.

For newlywed Leslie Force- Clarke, the night was a dream come true.

The 41-year-old health care worker from Rochester, N.Y. — clad in a special No. 40 Detroit Lions home jersey with “Kid Rock” on the back — watched from floor seats with her husband of one month. The trip and tickets were a wedding present from her guy, whom she met — fittingly — while standing in line at a Kid Rock show in Toronto 16 months ago.

“He’s very serious about his hometown,” Force-Clarke said of her musical idol.

And his hometown is serious about him: More than 45,000 tick- ets sold out in 19 minutes for the special birthday concert.

Hundreds of fans lined up outside the Lions’ home hours ahead of time, waiting in subfreezing temperatures to be among the first inside.

The show’s stage was set up in one end zone and featured a long catwalk that allowed Rock to interact with fans on the floor. Two video screens on either side of the stage displayed still pictures of Rock through the years: from his boyhood in suburban Romeo, Mich., through his early years as an area DJ and rapper up to the present.

Round, stacked pedestals made to resemble layer cakes also flanked the stage, and featured scantily clad female dancers atop them early in the show.

The screens carried messages from famous friends who couldn’t make it, including

He also brought out another high-profile duet partner for “Picture.”

“Sheryl Crow!” he shouted as she strode up. Crow sang as she walked, but it was hard to hear her over the roar.

Rock and Crow didn’t stop there, pairing up for a sexed-up version of the Free classic, “All Right Now,” and wrapping up a three-song mini-set with “Collide” from the new album.

Not all of the guests were from the world of music.

He ended the nearly three-hour show with the title track off “Born Free.”

“Did you have a good time?” he asked as he began the finale, and put his fist to his heart after a huge response from the crowd.