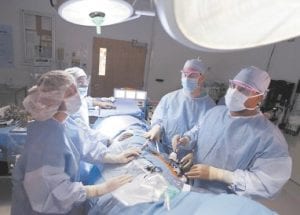 “A whole new doorway of hope opened,” says Tom Otten, a suburban St. Louis police officer who traveled halfway across the country to Georgetown University Hospital to give a stranger a kidney so his wife would get one in return.

Relative after relative failed to be the match his wife, Irene, needed. Tests finally showed her body wouldn’t tolerate a kidney from 95 percent of the population.

In Washington, Roxanne Boyd Williams was a similar long shot. A sister’s kidney had saved her in 2005, but it failed this year. This time around, the 30-year-old mother’s immune system also had become abnormally primed to attack any new organ.

Dr. Keith Melancon, Georgetown’s kidney transplant director, offered a rare option. If both women could receive a close-to-perfect donor kidney — one that few of their immune system’s elevated antibodies recognize — he’d filter from their blood enough of the remaining antibodies to allow the new organ to survive.

A kidney exchange widens the pool of potential organs. That’s when patients find a friend or relative who isn’t compatible with them but will donate on their behalf, and the pairs are mixed and matched.

Like falling dominoes, Tom turned out to be Roxanne’s needle in the haystack. Another young woman was Irene’s. Roxanne’s father came from Florida, the answer for yet another impossible-to-match grandmother.

“It’s a large gift to give somebody, something so selfless,” Williams says, her hand clutching Otten’s as the two meet a week after surgery. “God bless you.”

The chain reaction — multiplied by three altruistic donors, people offering a kidney to anyone — turned into a 13-way transplant, during six marathon days of surgery at Georgetown and nearby Washington Hospital Center. It’s believed to be the largest exchange of its kind in a movement that could reduce the nation’s long and growing wait for a donated kidney.

Five patients got kidneys only because of the bloodfiltering.

And strikingly, 10 of the 13 kidney recipients are black, Asian or Hispanic — important because minorities are far less likely than white Americans to get a kidney transplant from a living donor, the best kind.

“You are going to die a lot earlier sitting on that dialysis machine than if you get transplanted,” says Melancon, whose goal is to pair domino kidney exchanges and the blood-cleansing treatment called plasmapheresis to narrow the troubling disparities.

Of the 88,000 people on the national waiting list for a kidney, just over one-third are black, yet they receive only about 13 percent of living-donor kidneys. Blacks are disproportionately struck by the kidney-killing twin ravages of diabetes and hypertension, leaving those on dialysis with fewer donor candidates among their own family and friends.

For everybody, fewer than 17,000 kidney transplants are performed a year.

“These procedures really multiply the number of transplants that can be done,” Melancon says, predicting the two together could enable up to 4,000 additional transplants a year. “It’s really almost a religious experience when we start doing this, because it’s miraculous, it really is.”

The Associated Press documented weeks of the complex logistics, the ups and downs as Melancon’s team planned initially for a 16-way transplant, juggled donors and recipients for best matches and had to drop some — including one with heart problems that aborted his surgery.

In the end, 13 pairs emerged with life-altering bonds.

“I’m ready,” Roxanne Boyd Williams says with a smile as nurses wheel her gurney toward the operating room. She’s been counting the days, anxious to end the dialysis that leaves her too drained to provide much care for her 2-year-old twins and 7-month-old.

Williams was in college when lupus struck, rapidly destroying her kidneys. A kidney from her sister survived treatment for post-transplant cancer, a blood-clotting disorder and the twins’ birth, only to fail with her second pregnancy.

Back in Missouri, Irene Otten’s kidneys failed with no warning a year ago. Otten, now 40, went to the emergency room because of a racing heartbeat only to learn she needed immediate dialysis. Doctors couldn’t explain why; her only known risk was some high blood pressure.

Despair hit with news that the average five-year wait for a kidney is far longer for “sensitized” patients, with those hyped-up kidney-attacking antibodies. Her husband and 16-year-old have “been praying me through this,” she says softly.

Then an aunt saw a news story about Melancon’s work with the blood-filtering treatment, and Tom Otten tracked him down.

Now, it’s Dec. 4 and as Roxanne Williams goes under anesthesia, across the hallway Melancon already is snipping tissue, millimeter by millimeter, to extract Tom Otten’s kidney.

Working laparoscopically — through two tiny holes, guided by cameras — Melancon gently lifts Otten’s spleen out of the way. He winds around nearby organs and glands, like easing the kidney out of a shell.

It takes about half an hour longer to extract a man’s kidney than a woman’s, he notes. Tissue encasing it is thicker, more fibrous.

Three hours in, Melancon pauses, his blade near the ureter, the tube that carries urine from the kidney to the bladder.

“This is the point of no return. Ask if everything’s fine next door,” he tells a nurse. Reassured, he rapidly makes the final cuts and wiggles the kidney through a 4-inch incision low on Otten’s abdomen.

“It’s a beautiful kidney,” Melancon exclaims, laying it in a bucket of ice and heading for Williams’ operating room.

The matchmaking that brought Williams and the Ottens to this point is like piecing together a jigsaw puzzle.

Every Wednesday afternoon for months, Melancon pulls his transplant coordinators and lab scientists into a top-secret meeting in a cramped conference room. A magnet board holds the names and vital statistics of potential donors, posted on green cards, and recipients, on red ones. Participants can’t know who matches whom until surgery’s done.

Numerous transplant centers have done smaller kidney exchanges, and the United Network for Organ Sharing, which oversees organ transplants, is about to pilot-test a system to match donor-recipient pairs from around the country. The goal is to create a large enough national pool to identify a compatible donor for most people, says the group’s president, Dr. James Wynn.

Nearly 1 in 3 people awaiting a kidney transplant are sensitized. Why? Black patients seem most at risk but anyone can become sensitized from pregnancy, blood transfusions, a previous transplant, lots of dialysis.

In other words, the longer you wait for a transplant, the worse your chances of getting one.

“You guys are making me happy,” Melancon exclaims.

Now, “we’ve got to make Roxanne fit,” he says. “In our traditional system, she would never, never get transplanted.”

Two weeks later, Melancon finds a “phenomenal” donor for Irene Otten — Kelvina Hudgens, a Washington mother donating to end her own mother’s nearly 15 years of dialysis. Irene will need only half the plasmapheresis initially planned. And her husband Tom fits with Roxanne.

One couple is dropped for health reasons, and surgeries begin. The first pair does fine.Then a crisis. Melancon is removing a kidney from one of the exchange’s three “pieces of gold,” the altruistic donors who came without a partner in need. But the intended recipient’s heart isn’t tolerating the anesthesia. That operation’s called off.

Nurses race to find the next candidate atop the hospital’s kidney waiting list. Across town, IT worker Gertrude Ding’s cell phone rings. She’s just about to be hooked up for dialysis when she hears those magic words: “We have a kidney for you.”

Elated, Ding said she’d run home for her purse. No, come right away, the nurses insisted, and collected dollar bills for cab fare.

That night, Melancon rearranges the puzzle again. Losing the intended donor for the patient who had to be pulled back leaves one other pair matchless, for now — a total of 13 pairs.

“That’s why you schedule the hardest cases first,” Melancon says. “You don’t want their donor to have already given.”

Back in the OR, surgeons have some positioning to get tall Tom Otten’s left kidney into petite Roxanne Williams’ right side. Her left side contained too much scar tissue.

Then there’s the size. Your kidney is about the size of your fist. That makes Otten’s probably twice as big as Williams’.

Blood vessels finally aligned, Dr. Raffaele Girlanda meticulously stitches in the kidney. The room stills in anticipation. Clamps off, Williams’ kidney rapidly plumps up and turns a healthy purplish-red. A “whoosh” sounds as doctors check and find a strong pulse inside the organ.

And, “oh look at that!” Melancon points: Almost immediately, urine flows out, what Melancon calls the champagne of kidney transplantation.

Exactly a week later, a nervous Otten peeks into Williams’ hospital room, unsure what to say. “I think you have something of mine,” he jokes as Williams reaches out for a teary hug.

It’s been a roller-coaster week. Williams had some postsurgery pneumonia, but is exhilarated at how fast her new kidney is working — and laughs with Otten that finally, she won’t have to wait in the car during bathroom breaks on family trips. He tells of his wife Irene’s successful transplant, and how anxious they are to learn about her donor.

Williams shows Otten photos of her children taped onto the ICU wall.