Kids’ ear infections drop, but why? 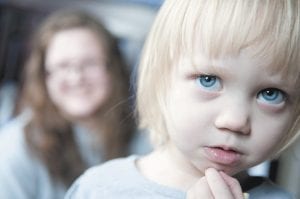 This picture shows Chesnie Shaver, 2, with her mother, Jessica Hyatt, 21, in their Spokane, Wash., house. Hyatt said Chesnie has had four ear infections, including a recent one that lasted close to two months. Health officials report nearly a 30 percent drop over 15 years in young children’s doctor visits for ear infections. In other words, each year there have been, on average, half a million fewer trips to doctors because of ear infections, but middle ear infections still plague many U.S. children. (AP Photo)

Ear infections, a scourge that has left countless tots screaming through the night, have fallen dramatically, and some researchers suggest a decline in smoking by parents might be part of the reason.

Why the numbers are declining is a bit of a mystery, but Harvard researchers think it’s partly because fewer people smoke, meaning less irritation of children’s airways. Many doctors credit growing use of a vaccine against bacteria that cause ear infections. And some think increased breast feeding is protecting more children.

“We’re sort of guessing here,” said Dr. Richard Rosenfeld, a New York-based ear, nose and throat specialist who speaks about the issue for the American Academy of Pediatrics.

To be sure, middle ear infections still plague many U.S. children.

For decades, they were the most common reason that parents brought young children to a doctor, according to health officials. The Centers for Disease Control and Prevention hadn’t issued a report on them in nearly 20 years.

Cases skyrocketed from 1975 to 1990. The visit rate for children 5 and under more than doubled in that time.

A big reason, Rosenfeld said, was a steady rise in dualcareer families. More families put their kids in day care, and day care is a breeding ground for the germs that lead to ear infections.

But the study by Harvard University suggests another contributor: cigarette smoke.

Most ear infections occur after a cold. In children, the ear is more directly connected to the back of the nose, so infections in a child’s nose and throat can easily trigger ear inflammation. Such swelling is a fertile setting for the bacteria that cause ear infections.

Cigarette smoke, inhaled through a child’s nose, can trigger the same kind of irritation and swelling, said Dr. Gordon Hughes of the National Institute on Deafness and Other Communication Disorders.

Harvard research indicates the decline coincides with a drop in childhood ear infections.

“When people are smoking less around their kids, when homes are smoke-free, the rate of ear infections can and has decreased,” said Hillel Alpert, lead author of a study published recently by the journal Tobacco Control.

At the request of The Associated Press, the CDC checked its recent trend data on ear infections, based on annual surveys of a representative sample of doctors.

For children ages 6 and under, the number of medical visits in which the main diagnosis was ear infection dropped by nearly 30 percent from 1993 to 2008 — from an estimated 17.5 million visits to about 12.5 million.

The trend downward for very young children seems to have leveled off in the last few years.

A CDC analysis of data from 2004 through 2008 found the differences year-to-year were not meaningful, said Susan Schappert of the CDC’s National Center for Health Statistics.

Some doctors have noticed fewer ear infections in their waiting rooms compared to what they saw years ago. “We don’t see them that much anymore,” said Dr. Michael Baron, a family practice doctor in Stone Mountain, a suburb of Atlanta.

Another factor in that decline may be growing use of a vaccine that protects against strep bacteria that can cause ear infections. The vaccine, first licensed in 2000, would not account for the drop in cases in the 1990s, but probably has contributed to the decline since, several experts said.

Also, some studies have credited antibody-rich breast milk with lowering infants’ risk for respiratory and middle ear infections. About 77 percent of new mothers breast-feed, at least briefly, up from fewer than two-thirds in the early 1990s.

Of course, these are just theories.

None seems to explain the Willis household in Charlotte, N.C. Neither parent smokes, both children have had all recommended vaccines, and Vanessa breast-fed each child for about three months.

Yet their 6-1/2-year-old son Hatcher got 10 ear infections in only a year when he was younger. Their 21-month-old daughter Libby Jeanne has had three or four ear infections, too, including one just last month.

Hatcher’s first bouts with ear infections were particularly rough. “He would shriek and cry and we couldn’t figure out what was causing him so much pain,” said Vanessa, 35.

“I remember spending many nights on the couch sitting straight up, holding him against my chest,” the only way the boy would sleep, she said. “That’s a miserable thing for working parents.”

Jessica Hyatt, a 21-year-old mom in Spokane, Wash., whose home is also smoke-free, said her 2-year-old daughter Chesnie has had four ear infections, including a recent one that lasted close to two months.

Various treatments, including antibiotics, have not worked. Jessica, a college student, has repeatedly missed classes to be home with Chesnie.

“You feel so hopeless. You can’t help them and they’re so miserable. It makes you want to sit there and cry,” she said.