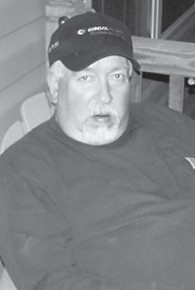 “Oh no, say it isn’t so. Not the big 5- 0!” Johnny Roy Whitaker of Jeremiah will celebrate his 50th birthday on March 25. He is the son of the late Amos and Nella Whitaker, formerly of Jeremiah. He is the husband of Tammy Whitaker and has two children, son Johnny Roy Whitaker Jr. and daughter-in-law Shequeenia Whitaker, and son Jordan Whitaker. His grandchildren are Colton Whitaker and the late Ashton Skylar Whitaker.

Hello all! I hope each of you is doing great. My little family is finally in good health. Thank goodness!

How are you liking this weather? We all love it. The kids have been playing outside for the past two days. I thought I may have to ‘scrub them down like a hog’ to get the dirt off of them of the afternoon when they came in. Thankfully a little soap and water did the trick. It was a close call though.

The yellow Easter bushes behind Mom’s house are in full bloom. They are so beautiful. My sister Opal Jent said that the lilies are blooming as well. I haven’t seen any of those just yet though.

Sunday, the boys and I ate dinner with the family at Mom and Dad’s house. After dinner, Mom and I sat down with a quilt I have been working on and she attempted to teach me how to tack it. Needless to say, I’ll never be as good as her, but I am getting better with practice. I probably should have just quilted it on the machine, at least that way I know what I am doing. Tacking a quilt looks a lot easier than it actually is. Trust me, looks can be deceiving.

Later that afternoon my sister Missy, Mom and I all went out to visit with Grandma, Lucy Blair. She had just laid down to rest when we got to her house. She said she was feeling about the same, but that her knees and legs were hurting her. They were swollen pretty badly too. We stayed and talked to her for a few minutes then came back to Mom’s house so Grandma could rest.

Mom, Sylvania Whitaker, seemed to be feeling okay, but Dad, Allen Whitaker, is down with his back. He can barely sit down in his lazy chair without it about killing him. alaI believe he said he slipped the other day and threw it out.

Mom is scheduled for an appointment at UK next month. She has to have some tests to ensure she is still eligible to be on the transplant list. Please pray that everything goes as it should and that she is able to get a kidney soon.

Dad went to church at Letcher Manor Nursing Home on Sunday afternoon. He said that he spoke with Lassie Birchfield, and she said she is improving. Herman Caudill wasn’t feeling well and wasn’t able to come out for church and they missed having him. He comes about every time they have services.

Jake Halcomb was released from the hospital and is now back at home. His daughter, Jamie Collins, said that he is still weak, having headaches, and some swelling in his legs, but is thankful to be home. Jakes wife, Wilma Jean, hasn’t been feeling well lately either.

Mom said she spoke with Ila Adams on the phone one afternoon this weekend, and Ila said she is doing pretty fair.

Mom also mentioned that ‘Little Aaron’ Whitaker had called her this past week to check in on the family. She and Dad were glad to hear from him. Aaron had knee surgery recently, and is recovering.

Roger Whitaker had to have a boil on the back of his leg lanced one day last week. Mom spoke with his wife, Debbie, and she said he is on antibiotics and it looks like it is healing.

Rulah ‘Root’ Whitaker hasn’t been doing too well either. He still has infection in his head, and has been having headaches and some problem with his knee.

Charles E. Blair has been down in his back. He had to get another shot to help with it.

Joyce Ison of Isom was admitted to Whitesburg ARH on Friday, March 11. She was having trouble with her blood pressure running high and her legs were swollen. Opal said she is doing a little better now and hopefully will be released soon.

My late Papaw, Amos Whitaker, died 36 years ago on March 24. I would have loved to have been blessed enough to have met him. He was certainly loved by many.

Kristin Ingram will celebrate her birthday on March 18; Jalyn Hensley, March 19; Freda Combs, March 21; and Phoenix Emmons, March 23. Happy birthday to each of you! I hope your day is filled with all the love and happiness in the world.

If I have left anyone or anything out, just let me know and I will be glad you get you next time.

I hope everyone has a healthy and happy week. If you would like to contact me, feel free to give me a call or you may email me at alanacouch@hotmail.com.