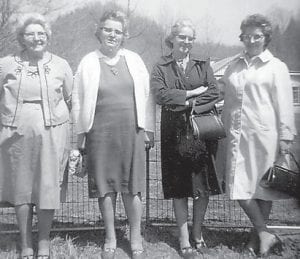 I don’t know about you all, but I am more then ready for this winter weather to be over. The worst part is we are not even a month into winter.

You know when I was young I don’t remember feeling this way about winter, as a matter of fact we would get upset when Mom wouldn’t let us girls go outside to play, but she would let our brother Albert. When we asked her why he got to go out she just said because he was a boy. Now I ask you, did that make any sense?

As we got older though, she would let us all go out and we, along with all the neighbors, would ride our sleds or makeshift sleds down the holler all day long.

Once I remember Albert being on the bottom of the sled and some of the rest of us sisters staggered out all along the route down the road. We would pile up on Albert one at a time until there was a stack of about four. Albert just about didn’t survive those types of rides.

But, now that I’m smarter I’m not a risk taker when it comes to getting out on the roads if they’re giving a forecast of snow or ice. I know some people who come and go without even thinking about it, surely not me. 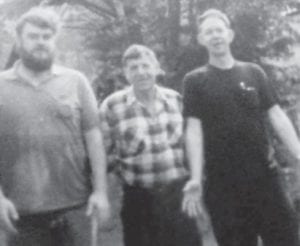 We were only able to go to the rec center once last week, and now he2re it is Monday and school is called off again. So, we’re home again and we certainly don’t like that.

We have lots of family and friends that need everybody’s prayers. My mother in-law has been in the hospital this past week with many problems. She is some better now but still in bad shape. She’s had to have blood transfusions along with antibiotics for infections. She may get out soon but is still very weak.

Also, my uncle Robert Wagner is in the Letcher Manor Rehab Center. He has osteomyelitis of the spine. He will be taking physical therapy and antibiotics for a few more weeks.

Mom’s sister Linda is still in Letcher Manor Nursing Home. Plus, remember all our family and friends who have lost loved ones. There are also lots of people right now with the flu that need our prayers.

My pastor was telling us yesterday when he went to visit at the Whitesburg ARH there were all kinds of people with medical masks on because of the flu. The last time we were at the nursing home I noticed part of it was sectioned off, not allowing visitors because of the flu.

I noticed on Facebook there was a post inviting anyone to the shape note singing on Thursday, Jan. 18, at 6 p.m. at the Boone Building in Whitesburg. If anyone loves to sing you should try it out. It’s not a choir practice type of singing, they just hop right in and start singing, no practice, no wrong way to do it. My sister, Delores, can tell you all about it.

There have been a lot of pictures added to the Growing Up in Marlowe Camp Facebook site here lately. Mom sure enjoys seeing all these and remembers all the people in them.

Speaking of which, there was a picture of a bunch of us grandchildren with Mamaw Penny sitting out in her yard and it brought up a lot of conversation about one of Mom’s brothers who was burned up in a house fire when he was 2 1/2 years old. They lived at Ice then and Mamaw had gone out to get coal out of a coal bank close to the house. She had just four children then, William Merrill, Margie, Murphy and James Earl. She just happened to look up and saw flames inside the house.

All the children except James Earl got out of the house. He hid between a dresser and the wall and they couldn’t find him. The others said he had been playing with the poker and it touched the curtains and set them on fire. The house was just a plank house, no studs, and if they had known where he was they could have just pulled those planks off and pulled him out. They found his bones there with the skin from his neck where he had tucked his head down to his chest.

Mom’s aunt Sabrina Caudill Pennington also had a child to get burned up. She had on an ‘outin gown’ (I think that means flannel), and just happened to walk too close to the fireplace and caught the tail of it on fire, and before they could get it out it had burned her up. Her name was Helen Pennington.

I was thinking about the way things change from one generation to the next. Can you imagine how hard it was for them back then to heat their homes and take care of their families? What they ate they had to grow or raise. What they heated with they had to get themselves.

Right now I have two propane gas fireplaces that come on automatically when the temperature of the house gets below whatever I have my remote set on. The gas is brought to our bulk tank and pumped in it without us touching anything.

Mom has natural gas in her house and stays as warm as she wants. I surely do thank God for these luxuries. Can you imagine having to go out to a well to get water and then heat it on the stove to have hot water?

When we were little and lived on Colson in one of Maude Richardson’s houses we thought we were lucky because our well was right off the back porch and so we didn’t have to carry our water very far like Mom had to before she was married. At Mamaw Penny’s there was a hand pump right on her kitchen sink and we thought that was a miracle. Then, in January 1962, we moved to Cane Hollow where we had an inside bathroom and what Mom and Dad called running water.

Can you imagine having just one child and not having running water these days? Charlene and I didn’t want to move to Cane Hollow. We loved our little four-room house with no bathroom but instead an outside toilet.

We had a chicken house that we used for a playhouse and there wasn’t one at Cane Hollow. I think that was the main reason we didn’t want to move.

I remember the first time Mom gave me and Charlene a bath in the tub I was screaming the whole time the water was running up around us. I thought Mom was going to let the water fill up to the top of the tub just like they did in the Dagwood and Blondie comic strip and we would drown.

My sister, Delores, would stand at the commode and scream the whole time it was flushing. I don’t know why she didn’t just walk away and leave it alone but it was like she didn’t want to watch it and she couldn’t not watch it.

Enough reminiscing, I’ll go ahead and remind you again of what Oma Hatton would always say: Try your best to attend church somewhere Sunday, and I say if your church has services Sunday night and throughout the week God would want you there then too.