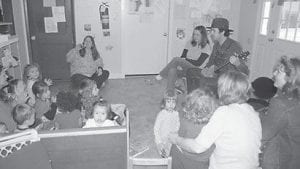 A MOUNTAIN MUSIC LESSON — Preschoolers, toddlers and infants listened and danced while John Wezley Haywood, a musician and teacher with the Early Childhood Program of Traditional Music, played the banjo at Appalachian Early Child Development Center on March 25. The center, located at 356 Circle Drive in Whitesburg, has partnered with Cowan Community Center to form the Early Childhood Program of Traditional Music, a program funded by the Appalachian Regional Commission.

One childcare center in Letcher County is trying to expose children to traditional music at a very young age.

Since January the preschool class has traveled to Cowan Community Center every Wednesday to hear traditional music and storytelling. They will also learn how to square dance.

Recently John Wezley Haywood, a musician and teacher with the Early Childhood Program of Traditional Music, visited Appalachian Early Child Development Center with his wife, Kelli, and their children, Deladis and Ivy. He played traditional music and told folktales to all students at the center including toddlers and infants.

“We have been able to expand our existing Appalachian programs with participation in this program,” said Bonita Adams, administrator of the center.

Adams said the center was established with a mission to provide a quality early learning center with a focus on Appalachian culture and traditions.

“We have never had the financial means to bring mountain artists such as John Wezley Haywood into our center to work with our staff and children but have always known the significance of early introduction to music,” said Adams.

Adams said birth to five years old is the most important age for building a strong music foundation, with parents and caregivers being the first and most important music teachers.

“Our children are guided and encouraged by a supportive staff to experience and enjoy the gift of music,” said Adams.

Adams said the preschool instructor incorporated and expanded different music and art activities learned from the programs into the center’s curriculum to help give children different ways to enjoy traditional music, storytelling and dance.

“All children are musical and have a natural sense of rhythm and melody,” said Adams. “Music instruction stimulates speech and oral development. The potential for achievement in music will decline if children are not exposed to quality musical experiences between birth and eight years old.”