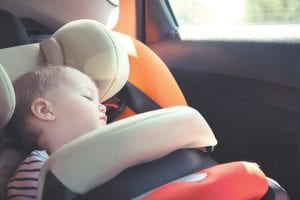 Children aged one to two years need 11 to 14 hours of daily and nightly sleep, new guidelines from the American Academy of Sleep Medicine say. The group released its first-ever guidelines this week. (Shutterstock photo)

Parental warning: Don’t lose sleep over new guidelines on how much shut-eye your kids should be getting.

The recommendations range from up to 16 hours daily for babies to at least eight hours for teens. They come from a panel of experts and give parents fresh ammunition for when kids blame them for strict bedtimes.

According to the guidelines: Adequate sleep is linked with improved attention, behavior, learning, mental and physical health at every age covered. And insufficient sleep increases risks for obesity, diabetes, accidents, depression and in teens, self-harm including suicide attempts.

The recommendations are based on a review of scientific evidence on sleep duration and health.

— 12 hours to 16 hours including naps for infants aged 4 months to 12 months. Younger infants aren’t included because they have a wide range of normal sleep patterns.