Kids talk to Congress about living with diabetes

Abraham and Curtis Strader just finished kindergarten, but they already have had thousands of shots to

reduce the effects of a disease they

have had since they were 2.

This summer, 150 kids from around the country traveled to Washington, D.C., to talk to lawmakers about living with type 1 diabetes. Their goal was to convince Congress to spend more money on the search to find a cure for the disease. 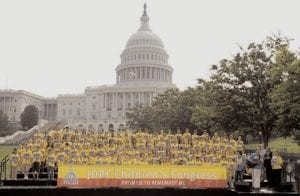 PHOTO COURTESY OF LARRY LETTERA/CAMERA ONE Delegates assemble in Washington, D.C., for the JDRF’s Children’s Congress.

The Juvenile Diabetes Research Fund (JDRF) used to send adults to talk to Congress. Their goal was to raise awareness about type 1 diabetes. But a few years ago, an 8-year-old from Massachusetts named Tommy Solo came up with a better idea: Why not have kids to tell the nation’s lawmakers what it’s like to live with diabetes?

The first Children’s Congress was held in 1999. Since then, the event has been held every two years. “The main reason why we go to Washington is to put a face on the disease,” Caroline McEnery, a 17-year-old delegate from Connecticut, told Time For Kids. “You can write letters and call members of Congress but there’s nothing like actually going and telling your story.”

A number of athletes and other celebrities with type 1 diabetes joined the young delegates in Washington, D.C., to offer support and inspiration. NBA star Adam Morrison of the Charlotte Bobcats spoke to Congress about the importance of finding a cure for the disease. “I hope to help make Congress aware of the seriousness of diabetes and try to raise more funds for research,” he told TFK.

Elliott Yamin, a 2006 “American Idol” finalist, also emphasized the importance of managing the disease. “Don’t deny this disease. Take control of it,” he says. “As long as you take care of yourself, you can do anything you set your heart out to do.”Yamin joined the 150 young delegates in singing the theme song of this year’s Children’s Congress, “Promise to Remember Me.”

When 12-year-old Tre’ Hawkins spoke before a Senate committee, he reminded the members of Congress of the song’s message. “Right now my biggest dream is to be cured of diabetes,” he said. “Please remember me and work hard to provide more money for diabetes research so this dream can become a reality.”