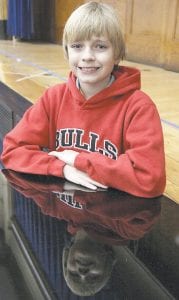 Erik Yehl, 11, who has been stuttering since preschool, said the film “The King’s Speech”, about a stuttering monarch, was sometimes tough to watch, because it hit so close to home. The film is earning praise by stutterers of all ages. (AP)

A movie about a stuttering monarch, without sex, car chases or sinewy super heroes, hardly sounds like blockbuster box-office fare.

But in a less flashy way, “The King’s Speech” is about a hero, one who battles an invisible enemy that torments nearly 70 million people around the world. In demystifying the littleunderstood speech impediment, the award-winning film reveals myths and fascinating truths about stuttering, and has won praise from stutterers of all ages.

For Erik Yehl, an 11-yearold Chicago boy who began stuttering in preschool, the movie’s powerful message is, “I’m not stupid.”

It’s a stigma all people who stutter contend with — the notion that because their words sometimes sputter or fail to come out at all, their minds must be somehow mixed up.

“People who stutter — their minds are perfectly good, and they’re not deaf, and they don’t need to be told to breathe. They know how to breathe. What they need … is to be listened to,” said Susan Hardy, who saw the film with her son Aidan, a 14-year-old Chicago eighth-grader who also stutters.

Aidan’s mini-review? “It was great!” he said.

The film depicts King George VI, father of England’s Queen Elizabeth II, as a reluctant leader tortured by his stuttering. But with a sense of duty as England confronts a second world war, he musters the courage to seek speech therapy so he can address and calm an anxious nation.

The movie and its actors have already won Golden Globes and other honors, including 12 Oscar nominations. The Academy Awards ceremony is Feb. 27.

The focus on George’s relationship with his eccentric speech therapist who insists on treating him as an equal makes the king a sort of everyman for people who stutter.

TV commentator Clarence Page, a nationally syndicated Chicago Tribune columnist, said in an interview that the film heroically depicts a condition he has battled most of his 63 years.

Like the king, Page had a strong advocate: a coach who helped him as a teen win second-place in a speech contest after a humiliatingly bad performance the previous year.

“ Every stuttering kid needs optimistic support like that,” Page wrote in a recent column praising the movie.

Jane Fraser, president of the Stuttering Foundation of America, said the movie mirrors her experience growing up with a father who stuttered. Malcolm Fraser formed the advocacy group in 1947 to raise awareness and provide resources for people who stutter. Watching the movie, Jane Fraser said she relived the mortification she used to feel on her father’s behalf.

“The impact for me was just bringing home 64 years of trying to get across to people how devastating this disorder is. Just in one fell swoop, this film really got that across,” she said.

Stuttering affects almost 1 percent of the global population, including 3 million in the United States. It typically begins in early childhood as kids are learning to speak and is more common in boys. About 5 percent of children stutter, but most outgrow it. The condition tends to run in families and genes are thought to be involved in at least some cases.

For Erik Yehl, a fairhaired, soft-spoken boy who loves basketball and video games, the film was sometimes tough to watch, because it hit so close to home. A scene showing George failing miserably while trying to give a speech to a packed stadium was particularly difficult. British actor Colin Firth’s portrayal makes the shame George feels uncomfortably palpable even for non-stutterers.

“It was hard to hear the speech because he stuttered and I hate to hear that,” Erik said haltingly.

Erik’s stuttering becomes most noticeable when he’s nervous. Curiously, his speech flows fluently when he calls out to teammates while playing basketball or soccer.

The film reveals another surprising truth — singing often frees stutterers of their problem. And experts say that for some people, stuttering disappears when they speak to infants or animals, imitate a foreign dialect, or perform a role onstage.

British actress Emily Blunt has been quoted as saying she chose her career after discovering in a school play that her own stuttering stopped while she was acting.

The scant brain imaging research done on the impediment has suggested that different kinds of brain activity occur when people stutter than when they speak fluently. Scientists aren’t sure why, and also don’t know why different activities induce fluency among some but not all stutterers, said Ehud Yairi, a prominent University of Illinois expert on stuttering.

But it’s unclear what function those genes have and much about the condition remains a mystery, Yairi said. A researcher and professor emeritus, Yairi is also a stutterer, who speaks at a measured, slow pace.

It used to be thought that stuttering was a psychological problem caused by anxiety or nervousness, and “The King’s Speech” seems to suggest that George’s mistreatment as a child may have contributed to his condition. But experts have largely dismissed that idea, Yairi said.

When children begin to stutter, they’re usually too young to be aware of it and rarely seem anxious about their speech. It’s only as they mature and perceive the negative reactions that they become anxious and ashamed, Yairi said.

Scientists also used to believe stuttering developed in some children in reaction to parents reprimanding them if they repeated words or sounds while learning to speak.

“We have shown that this is quite likely not the case,” he said.

Still, Yairi said, it’s true that “whatever the cause, negative reactions can make a big difference in how the disorder develops.”

Aidan Hardy said he has been bullied and teased for stuttering. He hates it when people tell him to just calm down and focus.

“There are certain ways to help someone talk better and there are some things that most people think will help, but they don’t. I’m hoping this movie will fix that,” Aidan said.

Page, the columnist, said stutterers typically develop a deep vocabulary of words “to avoid our ‘trouble’ words.” For Page, trouble comes from words that start with vowels. He uses substitutes, even going so far as to request a pear when he’d prefer an apple — just to avoid tripping over the ‘a’.

Speech therapist Stephanie Hirsh, who runs the Center for Communication & Fluency Therapy in Highland Park, Ill., says she learned to control her own stuttering partly by using a breathing technique to maintain a continuous flow of air while talking. In the film, the speech therapist used a similar method by having King George insert an “ah” sound into a sentence before a treacherous word.

Hirsh also offers this advice: Let stutterers know they have all the time they need to express themselves, and that you really want to hear what they have to say.

She said her own parents were advised by speech therapists not to talk about her stuttering and not to bring it to her attention.

The opposite approach is now favored. That may be why many stutterers have embraced “The King’s Speech,” for bringing stuttering out into the open.

“If we don’t talk about it,” Hirsh said, “then it becomes even scarier.”