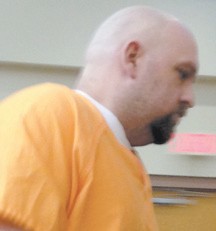 James Ray Maggard, the Neon man accused of murdering Dradrick “Drad” Fleming in June 2012, entered an “Alford guilty plea” in Letcher Circuit Court Friday that will protect him from the possibility of being sentenced to death by lethal injection.

“He admits there is sufficient evidence to try to persuade a jury to convict him,” said William Lewis Collins, one of two attorneys representing Maggard. “He thinks it is in his best interest to plea.”

By entering the Alford plea, which originated in a North Carolina murder case in 1970, the 34-yearold Maggard maintains that he is innocent of the murder, kidnapping and arson charges against him, but admits that enough evidence exists that a jury could find him guilty of attacking Fleming with a baseball bat at Millstone and then burning Fleming to death after he set Fleming’s truck afire at a remote location on Black Mountain, near Franks Creek at Eolia.

The plea agreement, which calls for Maggard to serve life in prison without the possibility of probation or parole, was signed at Friday’s hearing by Maggard, his attorneys Collins and Richard Counts, Letcher Commonwealth’s Attorney Edison G. Banks II and Fleming’s mother, Cathy Bentley.

In return for her guilty plea, Mrs. Fleming will serve life in prison and must testify against Maggard and a third suspect, Austin L. Ison, 25, of Pert Creek, who is also charged with complicity to murder, kidnapping and arson.

Although Banks said Mrs. Fleming might get a chance to apply for release on parole after serving a total of 20 years in prison, including the time she has served while awaiting trial, he believes it is highly unlikely that she would ever be granted parole after appearing at a hearing before the state parole board.

Prior to Mrs. Fleming’s sentencing, the plea agreement states that she is required to give a recorded sworn statement of her account of her husband’s murder that will define “the roles played by all parties involved.”

Unlike Mrs. Fleming, Maggard will not be required to testify against any other defendant charged in the case.

“He doesn’t want to testify against anyone,” said Collins.

Investigators have maintained that Mrs. Fleming and Maggard began conspiring to murder Drad Fleming after they became lovers while working at Mc- Donald’s in Whitesburg. Sources knowledgeable with the investigation have said that Mrs. Fleming masterminded the plan and convinced her husband to increase the amount of his life insurance policy about a month before the murder.

Authorities have said that Ison, a former mortuary student, was not present at the beating and murder, but assisted Mrs. Fleming and Maggard in planning the crime and told the lovers how hot a fire would have to be in order to disintegrate the body of Mr. Fleming.

Mrs. Fleming and Maggard were charged in the case on the afternoon of June 23, 2012, after Maggard walked into the sheriff ’s offi ce and admitted to his role in the slaying before leading deputies to the crime scene on Black Mountain.

Drad Fleming went missing on the night of June 20, 2012, sometime after he was last seen looking for a place to park in Neon so he could attend visitation for an uncle who had been killed in an all-terrain vehicle accident. Authorities have said Mr. Fleming, a roof-bolting machine operator for Cumberland River Coal Co., left before attending the wake after being lured by Mrs. Fleming back to the couple’s trailer so that Maggard could ambush him with the baseball bat.

Video surveillance taken from a coal mine near Little Fork of Franks Creek shows Fleming’s truck driving by the mine site at a high rate of speed at 10:15 p.m. on the night of the murder. The recording also shows Maggard walking back down the same road one hour and 37 minutes later.

Maggard’s cousin, who works at a nearby mine site, told police that Mrs. Fleming showed up a short time later and brought cleaning supplies and clean clothes to Maggard, who then washed and changed into the clothes in a guard shack before he and Mrs. Fleming left Black Mountain together. An autopsy performed the day after the remains of Mr. Fleming were recovered revealed that he died of “smoke inhalation and thermal injuries.” The report said that Mr. Fleming’s lungs, larynx and trachea contained “abundant amounts of soot.”

After Maggard appeared in court Friday, Banks said based on the Letcher County Sheriff ’s Department’s investigation, he, the sheriff ’s department and Drad Fleming’s family agreed to Maggard serving life in prison without the possibility of probation or parole.

“We believe justice has been served,” said Banks.

Mrs. Fleming’s formal sentencing will be held on April 16 and Maggard is to be sentenced on April 23.

Ison’s trial, which is not a death penalty case, is scheduled to begin on April 28 in Letcher Circuit Court.