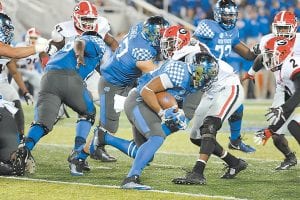 Benny Snell carried UK’s offense late in the game against Georgia but blamed himself for not getting into the end zone on UK’s final drive. For more on Snell, turn to Page B8. (Photo by Vicky Graff )

If a player comes to Kentucky, John Calipari has to have seen something special in that player to offer him a scholarship.

The Kentucky coach knew freshman Sacha Killeya-Jones was a good player. He just didn’t know how good he was until he got on campus and started competing with other talented teammates.

So was Killeya-Jones, who originally had committed to Virginia, just better than Calipari realized or has he improved since getting to UK in June?

“I think maybe both. I have gotten a lot better since I have been here,” Killeya-Jones said. “Obviously Coach did his research and knows what I am about. I think I have just got better since I got here thanks to him, the other coaches and the competition in practice against those guys. I guess I have just shown what I can do every day. I play as hard as I can. I have gained 12-13 pounds since I got here. So it is just a combination of things.”

He was glad he got to show off what improvement he’s made at the preseason combine attended by 90 NBA scouts and coaches.

“It was an experience like I have never had before. I have played in front of a ton of people before, so in terms of numbers there were not that many people here but the level of the people here was crazy. Just when you walked in the gym before to get treatment and I was looking and there is (Boston general manager) Danny Ainge and others. It was cool.

“When you are at a lot of other schools you hope NBA scouts see you or somebody is watching, but here you have a practice in front of all of them and know they are going to see what you can do. That’s hard to beat.”

Killeya-Jones hopes that describes him. He has the biggest hands and longest reach of anyone on the team. Former UK player Mike Pratt, now an analyst for the UK Radio Network, thinks Killeya-Jones could be a solid rebounder and inside defender, something UK needs to go along with Bam Adebayo.

“I am going to fight every possession, not take any plays off, not force anything, play smart and take advantage of situations,” the 6-10 freshman said. “I love to create mismatches. I still need to be more physical even though I have got stronger.

“I want to be the best version of myself whether I play four years at Kentucky or I am a one and done. My dream is to be a Hall of Famer. Coach said to do that, I just have to work as hard as I can and that’s what I do. I knew it would be hard here. Even the conditioning was hard but I never regretted the workouts and actually felt good about what they were doing for me. ”

Killeya-Jones is part of an outgoing freshman class that does not seem the least bit overwhelmed by the attention and scrutiny of the Big Blue spotlight.

“The main thing it helps is that we are all together. We are like brothers on and off the court. We get along well,” Killeya-Jones said.

De’Aaron Fox and Adebayo knew each other before signing with UK, but Killeya-Jones, Malik Monk and Wenyen Gabriel got to first interact with the others during postseason all-star games last spring.

“It helped us having those earlier connections but once we got here, we are with each other all the time either working out or in the dorm,” Killeya-Jones said. “The coaches told us when we got here if we went to the mall to expect fans to know us. I don’t have any issue with fans asking for autographs or pictures. I was the same way as a kid. If anybody asks me for a picture or autograph, I will do it because that’s the right thing to do.”

With the success of Kentucky’s offensive line the second half of the season, there’s been no mention of redshirt freshman offensive lineman Mason Wolfe of Henderson County.

He was a three-star prospect and picked UK over California, Louisville, Purdue and Missouri. He was regarded as the best offensive lineman in Kentucky in the 2015 recruiting class.

“He is doing well. I think it is a good comparison with him to where Bunchy (Jervontius Stallings) was at this time last year,” UK line coach John Schlarman said.

Stallings played sparingly in 2015 but has worked his way into the nine-man playing rotation this year and has become a starter at guard at times. Schlarman said Stallings was close to being ready last year, much like Wolfe is now.

“Mason is kind of right there. He is playing well at practice. I am confident when he gets a chance to go in there in games, he’s going to do very well,” Schlarman said.

“That chance just has not presented itself yet. But he is a guy right now that if anything happened to someone, he could be in there playing and I would be very confident putting him in there because I think he is ready.”

Wayne County’s Jessica Hardin made her Kentucky debut last week four years after her high school career ended. She spent one year at Bellarmine before transferring to Kentucky to just be a regular student. Her basketball was limited to sorority intramural games.

But Hardin, a former 12th Region Player of the Year that I got to see a lot in high school, answered the call when coach Matthew Mitchell needed players this season.

She already knew one current player, Maci Morris of Bell County, because they competed against each other in high school.

“One game their point guard was doing a screen. I nudged her (Morris) a little bit and she ran into her other player and it kind of took her out and she went to the emergency room,” Hardin said.

“I promise it was just a nudge. We had some good battles. One season we played against each other like four times. I accidentally took her out but we are still friends and just kind of joke about it now,” Hardin said.

Morris certainly remembers those games against Wayne County and Hardin.

“She is very aggressive. She loves to attack the rim. She had a lot of energy in high school and it was a fight against her,” Morris said. “We went at it when we played each other. It was a friendly competition. We had an incident in a game one time and I ended up having to go to the hospital. It happens. It was not the first time, but it is funny she is on my team now. But it was more than a nudge.”

Nudge or not, it’s all good now with the two UK teammates.

“I always hoped I could play at UK and now that I am here, we are together and cool to have her as a teammate … and I probably won’t nudge her again,” Hardin said.

Freshman center Bam Adebayo has been impressive in UK’s exhibition outings, but coach John Calipari likes what he is doing in practice even more.

“This kid works every day. He’s in there — one of the first in the gym. He’s got a smile on his face every day I walk in. I’ll give him a mean look and then he gives me a mean look. He’s a great kid. But again, this is a process. This is November, the beginning of November,” Calipari said.

Calipari would like to see Adebayo not dribble when he gets the ball inside and just go straight to the basket because of his size and power.

“We’ve gotta get him where he’s comfortable at that free-throw line. All of our big guys are really good passers. And really, you gotta play them all because they can all shoot 15-footers, including Bam,” Calipari said.

What many might not realize about Adebayo is that he considers himself a “mama’s boy” and freely admits he calls her or texts her every day to keep his connection with her back in North Carolina.

Adebayo says he can even discuss his favorite musical artist with his mom.

“I can talk to her about Katy Perry. She does not mind. She wants me to explore my genres of music and just have fun,” Adebayo said. “It’s just her mood toward her music. She’s always happy and perky. I like to be happy, so why not listen to happy music from her.”

Kentucky players and coaches pleaded for Kentucky fans to fill Commonwealth Stadium for the game against Georgia. It wasn’t quite at capacity, but Big Blue fans answered the call and provided a great atmosphere for what turned out to be a 27-24 loss to the Bulldogs.

On Sunday, junior receiver Dorian Baker probably spoke for the team when he posted this on Twitter: “I just want to thank the entire BBN for coming out and supporting us. The energy was outstanding!”

It was and that’s what made the loss so disappointing, because UK could have been in position to reach the SEC championship game with a win and had plenty of chances to win.

“This was just a big opportunity for us to capitalize on the situation given to us. For us to fall short today was just — it kind of grounded us a little bit,” Baker said after the game. “We just have to learn how to finish. We were up the whole game and we just keep thinking there are ways to get better and we have to keep gashing it down and gashing and gashing and not let up. Even though we were winning, still, it’s possible that they can come back, and they did.

Painful? Ask freshman running back Benny Snell. He basically put the offense on his back when UK drove for the tying field goal but blamed himself for not getting the ball in the end on two runs inside the 10-yard line to end the drive.

Doubtful. No one can ever question his effort, and if UK has any chance to win at Tennessee Saturday, it needs plenty more of Snell and Boom Williams. The Vols still have a chance to win the SEC East and that will eliminate any chances of overlooking UK. But as painful as the Georgia loss was, Kentucky’s effort was fine and I’m expecting UK to continue that and put itself in position to have a chance to win in Knoxville. After the way UK started the season, I’m not sure I thought there would be any way I could have seen that happening, but I do now.