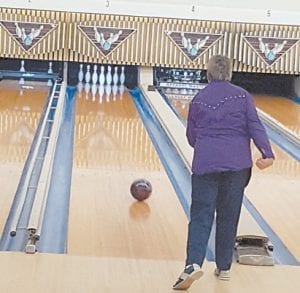 Kim Day demonstrates her bowling skill. Her birthday is November 25.

Happy Thanksgiving everyone! Have you started to plan your dinner for Thanksgiving as it is creeping up? Oh my goodness I just realized it is only a week away!

As a child we never knew what turkey and dressing was. Mom would always make a stake cake, and I’ve never found anyone that makes them like Mom did. Oh, I can almost smell shucky beans cooking, and taste them. Sometimes Mom would fix a kettle of chicken and dumplings

I hope you have those long johns where you can get them if it is as cold in your little corner of the world, as in this little part of the Ohio Valley area. To be honest, as much as I complain about the cold I wouldn’t trade our changing seasons for Florida, or wherever it stays warm all year long. The snow is beautiful, as long as I don’t have to drive too far in it.

I used to long to be in the mountains of eastern Kentucky just one more time to see a deep snow, then I think of how long it stays on and I can’t stay a week away from home.

My brother Richie and Wanda Hall have sent me pictures of the deep snow before.

Vicki Power is still talking about our trip this past weekend. Actually Vicki said she would like to see the mountains covered with snow. I replied saying I would find her lots of pictures.

As we were going through Roxana I tried to picture in my mind exactly where Burkes’ Store used to be, along with Ray and Fay Gentry’s house. Hiram Mitchell built a store, and Amburgey’s Store, which I think had a gas pump in front of it. The post office was close to the railroad tracks, with enough room between the tracks and the building that a car could go in between.

A couple of months ago, Annette Akers said when she young she was driving her boyfriend’s car which had no reverse, and she drove around the post office to get turned around.

Then I drove on around the road to Mill Branch. I finally could see a small portion of the cliff that used to be so fearsome, as a child attending Mill Branch School. Memories flooded through my heart and soul, as a couple of us girls would climb up the cliff, and find enough room to sit on the edge and dangle our legs over until the teacher would make us come down.

I have often wondered where my cousin Tony and Faye Shepherd lived and I finally saw their name on the front of their beautiful house.

Oh my goodness, houses are built on top of each other.

The only place I wouldn’t mind living is in Manuel and Laura Amburgey’s homeplace, where someone couldn’t hear you sneeze.

I found a place to turn around, and I’m sure it was at Rueben and Odell Watts’s old homeplace as there were oodles of Mike Watts’s campaign signs.

Had there been more time I would have driven across Mill Branch down Pratt Fork to show Vicki where these little feet have walked going to Woodrock to visit my grandma Betty Barton. As a child after school I’ve walked up Mill Branch many times to spend the night with several classmates.

On the drive back to Roxana I could visualize along the railroad tracks the vines and the flower that is known as passionflower, blooming. A couple of years ago Walter Powers from Virginia sent me a start of the passionflower, and it lived for a while and then faded away.

George and Minnie Whitaker’s place has deteriorated so bad that it was painful to look at. Minnie kept the house and yard immaculate. Minnie Mitchell and I sat under the rose arbor as kids.

George built a concrete block building, and put a wood and coal stove in it. Minnie would do her ironing there. In fact Minnie taught me to iron when I was 10 years old. I still iron to this day the way she taught me.

Pearl and Martha Whitaker’s house is still there, and is kept up real nice. I love the flowers and trees when I pass there in the summer.

Things have changed so much, it was hard to figure the exact place of the house that we lived upon the hill. I seem to remember there being three cabins on that hill that grandma Rosa Hall lived in, and one had a dirt floor.

Halley and Blanche Hogg’s house is gone and so many houses have taken the place. All I have is the memories of a simple life as a child. Some aren’t as good as the others, and things happened that made me the strong, independent person that I am today.

As I was driving through Roxana, for some reason I started laughing. When I was 12 years old, I had walked from Woodrock up Pratt Fork and across Mill Branch. When I got on top of the mountain, someone I had known all my life gave me a ride to Roxana. At this time the man was married and his wife got jealous of me. She had kids as old as me. is woman kept calling

Th me names to other people and threatening to whip me. She was at her parents’, and as I passed their house, she came to the door and called me a nasty name and said she was going to whip me.

I said if you feel froggy, jump. Well, let’s just say she tried but didn’t get the job done, as I had her on the ground and my dad had to make me get off her. Oh I know that hitting is never supposed to solve a problem, but there comes a time you are fed up taking, and it’s time to fight back.

Just because someone is tiny, don’t underestimate their ability to defend themselves. As I said the memories are still with me.

Vicki and I stopped at the restaurant in Isom. It is always wonderful seeing Cuma Jean and tease with her. Cuma is as beautiful now as she was years ago. I still think she should have trained to be a beautician, as when I was 12 years old I was her first experience in cutting hair. My hair had never been cut and was down to my waist, and Cuma cut it as short as a boy’s.

Daddy whipped me with a wide mining belt, but you know what? That didn’t make my hair grow back. For years I wouldn’t let it grow.

Happy birthday to Kim Day on Nov. 25. Tuesday night, Vicki and I went to Harrison Bowl to watch Kim bowl. This is the team’s last bowling date until January. Hayward Day, Kim’s dad, said Kim has a huge collections of awards as Kim has been bowling in the Special Olympics for 25 years.

It is amazing to watch this group. There’s so much to enjoy if we just take the time. For me it is dancing. As I am square dancing the old-fashioned way I can almost feel my mom and hear her laughter.

I wish there were pictures from back then. I know Mom loved dancing with Thurston Davis as a partner. I can still hear her saying, “Boy, he could sure pick them up and set them down,” meaning his feet.

After Daddy and Mommy were married, Mommy didn’t go to dances anymore. That didn’t stop the love nor the longing, as she would listen to a fast song on the radio and then she would call a few square dance calls that I still remember to this day.

Now you’ve had a trip down memory lane.

I’ve been teased and asked why don’t I move back to the mountains. Even though that part will always be home in my heart, with my family living in this area I wouldn’t be satisfied back there anymore. This summer I may take a few people up on their invitations to stay with them. Especially Mike and Marcia Caudill, if they will build a bonfire.

Just kidding, about staying but serious about the bonfire. I will bring the marshmallows as I can’t digest wieners.

At the time of this writing of my column, I have a Crock-Pot of ham hocks and soup beans cooking. My son Keith Ballard walked in as I was stirring the beans, and wanted to know if I put onions in them. I said no, and he informed they taste better with onions in them. Now I have cooked beans for years and never thought about adding onions.

As I am continuing writing this column, we are having an ice storm. The electric was off when I woke up, and there are 66,000 without electricity. Ours came back on.

We take so much for granted with our modern ways. Just walk to the sink and turn a knob or a lever, and you have water, hot or cold. Flip a switch you have electricity. It’s the same way with heat and air conditioning.

There are times I want to laugh as I hear people talking of how they ate different things as a child or had only three channels on a television. Again, we never had a television, and never knew what beef was, much less a hamburger.

Coffee is another thing. Spending five dollars or more for a special cup of coffee. Dad drank his black, and in later years Mom added a little cream.

I finally got around to seeing my cardiologist, and everything is great. I asked about A-fib, and he said no. He also said ever what I was doing keep it up, and he would see me in a year. If only something could be done for my digestive issues. I have gained nine pounds in three years.

My endoscopy results for the Barrette’s esophagus pre-cancerous cells haven’t changed, so everything is good, except the hiatal hernia has returned, so I have to watch it.

Maybe there are a few more trips for square dancing in the future. Hello to Les and Pat Wagner and all the family.

Well, I have a busy day ahead of me. Until next time, Rose Ballard, 9110 Lawrenceburg Rd., Harrison, Ohio 45030, email Bluegrassmama4@aol.com.