Kincer to get parole hearing 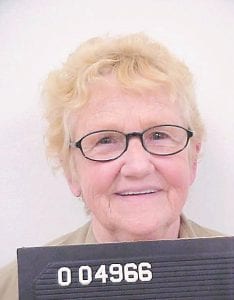 A Mayking woman who murdered her husband more than 20 years ago is eligible for parole consideration in February.

A Letcher Circuit Court jury found Rebecca Kincer guilty of murdering her 67-year-old husband Vernal L. Kincer by shooting him once in the head with his 16-gauge shotgun on May 1, 1991. Mr. Kincer was lying on a mattress in the living room floor of the couple’s home on Cram Creek when the crime occurred. Rebecca Kincer was 51 at the time of the shooting.

Kincer was sentenced to life in prison by former Letcher Circuit Judge Larry D. Collins on June 26, 1992. Now 73, she is an inmate at Western Kentucky Correctional Complex in Fredonia and is eligible to be released on parole on April 2, pending a decision by the Kentucky Board of Probation and Parole after the February hearing.

Persons who want to comment on Kincer’s parole eligibility may do so by contacting the probation and parole board at 1-800- 221-5991.

Kincer’s last parole hearing occurred April 2, 2004, after which action was deferred for an additional 120 months.