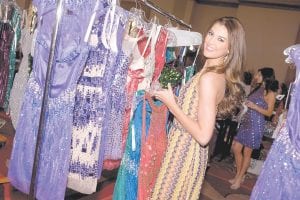 GETTING READY FOR PAGEANT — Destin Kincer, Miss Kentucky USA 2014, tries on Sherri Hill fashions during Miss USA registration and fittings that have been taking place in Baton Rouge, Louisiana in preparation for the pageant, which airs live at 8 p.m. Sunday on NBC-TV. Miss Kincer is a native of Letcher County. (Photo by Patrick Prather)

With the extended format, viewers will learn more about the contestants in a segment called “Road to the Crown.” An NBC film crew visited 21-year-old Kincer in Lexington on May 5 to shoot footage for the special segment. Kincer, a student at the University of Kentucky, was filmed at Rupp Arena with UK’s mascot Scratch. Her parents, Stephen and Mitzi Kincer, and her brother Dylan were also a part of the filming.

During the evening gown portion of the pageant, viewers with Twitter accounts will have the chance to “save” their favorite contestant by using the hashtag #SaveTheQueen and by including the correct spelling of the state in which that contestant is representing.

The telecast, which is expected to reach 70 countries and territories, will include musical performances by Florida Georgia Line, Nelly and Marc Broussard. 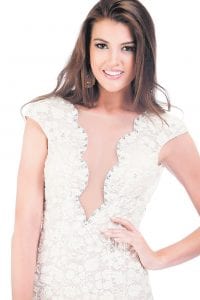 Destin Kincer, Miss Kentucky USA 2014, posed in her evening gown upon arriving to L’Auberge Casino Hotel Baton Rouge. The dress was specially designed by Sherri Hill for Kincer to wear in the Miss USA pageant. Kincer is touring, filming, rehearsing, and preparing to compete for the title of Miss USA 2014. The final telecast will air on June 8 live on NBC at 8 from The Baton Rouge River Center in Baton Rouge, Louisiana. (Photo by Patrick Prather)

Kincer, who will wear a white mermaid gown designed by Sherri Hill during the Miss USA competition, has been in Louisiana preparing for competition, touring, rehearsing and filming since May 25.

She was crowned Miss Kentucky USA around midnight on January 12 at the Ursuline Arts Center in Louisville. Kincer is familiar with the Miss USA organization as she was runner up in the Miss Kentucky Teen USA 2011 pageant. As an eighth-grader in 2007, she won Miss Teen Mountain Heritage, which was the first pageant she entered. She was Miss Mountain Heritage in 2012.

Kincer is a 2011 graduate of Letcher County Central High School, where she was a cheerleader and a member of the dance team. She is a member of First Baptist Church of Whitesburg.

Kincer’s family will be in the audience at the Baton Rouge River Center on June 8 as she vies for the title of Miss USA 2014. 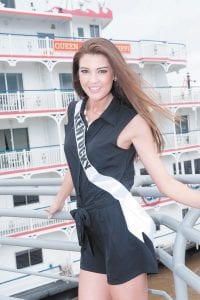 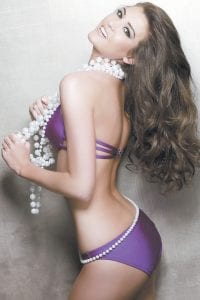 Photographer Fadil Berisha took this photograph of Miss Kentucky USA in her Kandice Pelletier Swimwear she will wear as part of the competion for the crown of Miss USA.