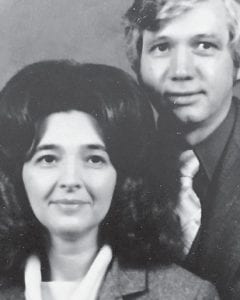 My, oh my, who can believe it’s already time for another Thanksgiving? Seems so impossible that another year will come to an end soon.

I am happy that our weather has improved over what it brought us last week, especially when all kinds of people are traveling. I hope everyone has as much to eat for Thanksgiving as we will have at my brother-in-law and his wife’s on Thursday.

The holiday will be a sad one for the Dawes and Evelyn Mullins Yonts family because of the loss of their mother, Evelyn Yonts. It will also be the first Thanksgiving my sister-in-law will have to spend without her mother, Jane Kincer Mullins.

I know there are many others in our community that will be thinking of their loved ones during Thanksgiving and Christmas. Please be thinking of all those who have lost loved ones, especially my pastor, Bill Jones, and his wife, Sandy, and all the rest of their family.

The Letcher County Senior Citizens were very busy the past two weeks and this week is about the same. Last Friday, many of them traveled to Arlie Boggs Elementary School at Eolia. Some of the students there make and sell many different items. Through this program they learn the business industry, many different math skills, and work ethics. The seniors also stopped by ECCO on their way home. 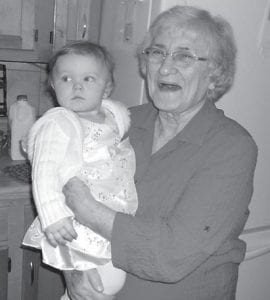 Evelyn Mullins Yonts with one of her granddaughters, Madison.

Just one of the many different activities they were involved in last week was visiting West Whitesburg Middle School. Debbie Baker, Pat Miles, and others worked with some of the students there using their handprints to paint turkeys and then with listing some of the things they were thankful for. Pat Miles said she enjoyed it just as much as the children did.

I found some pictures on Facebook of a wonderful couple, George and Betty Kincer. They celebrated their 60th wedding anniversary about two weeks ago. They have lived on Thornton for as long as I can remember.

The first time I met them I was about 20 years old. I had gone to Coeburn, Virginia, to see the movies “Jaws” and “Grease” with my friend Sharon Martin and her boyfriend Greg Chandler. I was driving a Dodge Dart that I had bought from Coy and Velma Taylor. 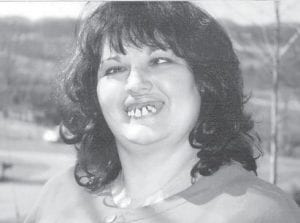 As I was coming through Thornton I heard an awful sound and knew it was a flat tire. I think I might have thought I could make it on home to Cane Hollow on Colson, but when I heard my rim hitting the blacktop I knew it wasn’t going to make it. So, I pulled over into their driveway and went to knock on the door. I had no idea who lived there, but I had no other choice. Well, God was surely with me because it just happened to be George and Betty Kincer. So, we would like to wish them a belated happy anniversary.

Earle Bone has been able to come back to the rec center and walk. It is so good to see him being able to get out and socialize again.

I know Charles Noble, Bennett Combs, Jack Burkich, Ronnie Halberstadt, and his good friend Billy Hatton are tickled about it. Another one of our cancer survivors at the center, Matilda Parks, has been back many times since completing her treatments, too. We are praying our friend Scarlett Coots is soon back to join us as well.

Now I want to wish the baby of our family, Delores Tacket Holbrook, a happy birthday. She will be turning 57 on the 26th of this month and she probably doesn’t want me to tell that. But, have you ever heard that saying, “It’s better to ask for forgiveness than to ask for permission?” It actually applies in this situation.

Anybody who knows her will agree with me. She should have either been a clown or a comedian. A few times Mom has even had to say, “What that girl won’t say!” Believe it or not, she does hold a few things back.

Once when she was a teenager she came home from school and came up to the kitchen door and knocked. Mommy was busy in the kitchen and saw who it was and didn’t go to the door. Well, Delores kept knocking and Mom kept ignoring her.

Finally, since Delores didn’t come on in, Mom went to the door and opened it. Delores just stood there and Mom finally asked, “Have you lost every bit of sense that you had?” Delores claimed this was for a high school assignment, but I think she was just acting silly.

Now when someone in our family does something crazy, we ask, “Have you lost every bit of sense that you had?” The rest of the family has a really hard time knowing if she is serious or is just joking most of the time.

Debbie Baker at senior citizens told me my sister was going to kill me when she saw the paper last week. I told her, “Oh no, honey, they know that what I put in the paper is mild compared to what I really know about them.”

So, I better stop here and remind you that Oma Hatton wants everybody to be in church Sunday. And remember, if your church has services Sunday night or throughout the week, God wants you there then, too.