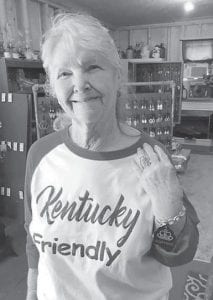 Happy Father’s Day! I hope everyone had a great day.

It seems we are having quite a bit of rain in this portion of the Ohio Valley area, along with cooler temperatures.

Thursday, I was able to use the wheelchair to get to the back deck for a little fresh air and sunshine.

Friday, the temperature dropped to 68 in the house, I turned the heat on

Hamilton County Park District owns the land surrounding my property. This year there’s a maze of wild purple flowers blooming in the field next to me.

There are also daisies that add to the beauty. I am so thankful to see wide open spaces.

Friday, my daughter Kay Gray took me to the orthopedic doctor. I have a pink cast on my left wrist. I have to wear it for three weeks, then back in the brace. I chose a pink color just to tease my son Keith Ballard, as he hates the color of pink.

Regardless of the color, it is very uncomfortable, as the small piece between my thumb and forefinger is very sharp. The cast covers the knuckle and is really irritating. I placed part of a cotton ball just inside the cast to take pressure off. My foot is in a boot. If it would only give me a little ease.

There are so many things I was looking forward to for the next few months. Now I will be spending some time at the house since I am unable to drive.

What bothers me more than anything is having to depend on someone to take me to appointments. I am usually the caregiver always doing for others. It will be some time before I will be able to drive. Then I will have to decide what kind of car

Meantime I’ve found it is much easier to make a plan and stick to it. Each morning I wait until Keith leaves for work, then I put everything I need in one place, and start with a sponge bath as I can’t get in the shower. When I am finished, I clean the sink and commode and do a little laundry.

As I come through the kitchen, I try to do a few things, then I have to get in the recliner to elevate my ankle to keep the swelling down. I try to wear something with pockets so I can have the cell phone with me at all times.

There’s something that stands out in my mind minutes after the accident. The first I remember is hearing the sound of metal, then feeling a huge jar. Then I remember fighting something that was covering my face smothering me. I guess that was when I hit the mirror to cause the laceration, and broke my left wrist.

The impact knocked my purse out of the passenger seat onto the floor. The back of my head the hit headrest so hard my hair clasp somehow flew to the right side of the floor. It landed on my purse. Somehow I managed to unfasten the seatbelt, to reach my hair clasp and to get my purse.

In my dazed state of mind, it was more important to get my hair out of my face. I was still struggling to catch my hair to fasten the clasp with one hand, as I couldn’t make my left hand cooperate. So help me, I was still trying to do this task when someone came to my rescue.

The man told me to shut off my ignition, as he was afraid the car was going to explode. I tried to get the door open. It would only open a few inches, and the man pried the door open.

I could get my left foot out of the car, however it was like the right leg wasn’t even there, as it had no feeling. The man somehow lifted my foot off the brake. He had someone help me into a kitchen chair, and slide me across two lanes to the side of the road while waiting for police and ambulance

The man was kind enough to catch my hair with his hands, so I could finally close the clasp. He never left my side until the ambulance got there. He even used his phone to try to call my niece Sue Hall for me.

I wish I had some way of finding out who this kind person was, as he was just someone who cared enough to help.

I’ve had one heck of a time trying to get my personal stuff from my car.

Last Wednesday two of my granddaughters, Jennifer Gray and Jodi Gray Davidson, took me to Lawrenceburg, Kentucky to retrieve my things. After making the 120-mile trip, there wasn’t a thing inside the car except the remains of the bumper and grill, nothing in the truck.

My car was towed from Jackson, Kentucky by Jeff Noble’s Towing to their place at Lost Creek. My niece Sue Hall was in touch with the owner of Jeff’s Towing, who said they would remove the items and place them in bags for Sue to pick up.

I was given the same information, then all of a sudden the owner says she doesn’t know if anyone got the things out. We made the long trip for nothing. which was very painful for me.

When I called Jeff ’s Towing, the owner said my things were there, that my niece or whoever hadn’t picked them up.

Jeff ’s Towing completely had no communication with each other car before State Farm Insurance had it towed to place in Lawrenceburg. I still haven’t been able to get my personal belongings, as no one answers the phone.

Saturday morning, I had made a trip up Tolson Creek to drive past Ann Calihan’s grandmother Mary Caudill’s old homeplace to see if there were roses growing. I knew I couldn’t dig if I found any. I did find a small bunch. I was so happy on the way home. I had the radio on, listening to oldtime music, such peace in my heart and soul. Not knowing my happiness was going to be cut short over someone’s stupidity.

Several years ago I brought Ann a huge vine of the rose from her grandma’s place. It bloomed each year, then died. Ann gave her next door neighbor a start of the vine. This week her neighbor did some work in her yard, and Ann saw something blooming, it was a small piece of the rose that Ann had given her neighbor some time ago.

Ann was so pleased to see it had survived. Now she can get another vine growing.

Hayward Day is improving; he still has a long way to go. Hayward and his daughter Kim Day are really special to me. I have been unable to go see Hayward, due to my accident.

It is so hard for me to accept the fact, I can’t walk without assistance of a walker. It will be a while before I can drive.

Johnny Calihan has a small garden, if it doesn’t get washed away.

A special belated happy birthday to a former Hot Spot girl, who makes her home in Michigan. Edith Gilley Robinson was 95 years young June 14. Edith is the daughter of Boyd and Alley Gilley of “Hot Spot” Premium. Edith is a retired nurse. Since Edith’s birthday is on Flag Day, Edith laughs and says the flags are for her.

Edith was able to live by herself until the last few years. She now resides with her daughter Brenda Dotson and her husband. It is such a pleasure watching Edith and a young great-granddaughter, Lily, doing things together on the computer. Brenda knew my brothers and sister. I wish I had the privilege of meeting Brenda in person.

Hello to Les and Pat Wagner, Polly and Becky Hasty, and all the family that is scattered about.

Thanks for the cards, get well wishes and for all the prayers. I thank God every day.