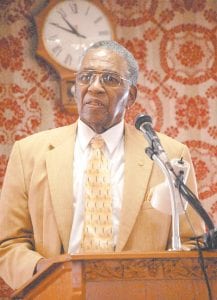 Bishop Willie Lamb, pastor of Church of God Militant Pillar and Ground of the Truth in McRoberts, spoke at the church Jan. 16 during an event to honor Dr. Martin Luther King, Jr.

Jenkins Mayor G.C. Kincer said if he could only pick one word to describe Dr. Martin Luther King Jr., it would be love.

“He changed the attitude from anger to love,” said Kincer. “He taught love and peace. This is the difference he made in his entire campaign.”

About 30 people gathered at Church of God Militant Pillar and Ground of the Truth in McRoberts Jan. 16 to celebrate Martin Luther King Jr. Day.

Monday’s event has been held each year since 1997 at different locations in Letcher County to allow students of the Cowan Community Center Youth Group to hear stories from other Letcher County residents about life before the passage of the Civil Rights Act of 1964.

Steve Peake, pastor of Corinth Baptist Church in Neon, said his parents taught him to treat people the way he wanted to be treated.

“That is something that has stuck with me,” said Peake. “ Growing up in Letcher County, we knew there was a black and white issue. Never had a lot of trouble.”

“He had a dream, believed in his dream and worked for his dream,” said Letcher County Judge/Executive Jim Ward. “ Take somebody who works hard in what they believe in and they can make it come true.”

Ward encouraged those in attendance to work together to reach dreams in the county.

Kincer said King tried “to bring us back to the human beings we should be in the beginning.”